Goldie’s Hubby, Andrew Harvey Opens Case On Prezzo ‘He’s Too Manipulating, She Despised Her And Distanced Herself’ 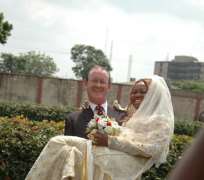 Many, no doubt, will be shocked to know that the late Susan Goldie Harvey was even married before her death.

The man recently surfaced on social network where he posted pictures of his late wife as a tribute to the dead. Andrew Harvey, the husband of the deceased, added that Prezzo, the guy Goldie had feelings for in the house. In his word, Andrew said his wife, Goldie complained to him that Prezzo was too manipulating hence her distancing herself from him.

''Prezzo was part of BBA game, just like in the movies, there was nothing to fear when it was on, I still had my wife but it was so funny when the media started dragging it.

It dragged because the media dragged it, other wise it would have died naturally. Prezzo will say anything to get attention. That Goldie fell in love with him, well, people fall in love and it's not impossible to love more than one person, but there are different levels.

She liked him initially, but began to despise him and distanced herself as he tried to use her she complained he was very manipulative'' Andrew Revealed.

On when they met and where, he said '' I met her at a friend's leaving party and fell in love straight away, but had to work hard to persuade her I was genuine.