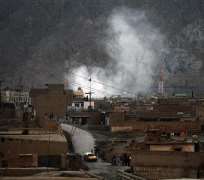 Pakistan's unpopular government, which is gearing up for elections expected within months, came under fire on Sunday for failing to improve security after a sectarian bombing in the city of Quetta killed 80 people.

The nuclear-armed country's leaders have done little to contain hardline Sunni Muslim groups which have stepped up a campaign of bombings and assassinations of minority Shi'ites.

On Saturday, Lashkar-e-Jhangvi (LeJ) claimed responsibility for the attack in Quetta, which deepened suspicions among Shi'ites that Pakistan's intelligence agencies were turning a blind eye to the bloodshed or even supporting Sunni extremists.

"The terrorist attack on the Hazara Shi'ite community in Quetta is a failure of the intelligence and security forces," Nawab Zulfiqar Ali Magsi, governor of Baluchistan province, said while touring a hospital.

"We had given a free hand to security (forces) to take action against terrorist and extremist groups, but despite that the Quetta incident took place."

The death toll from Saturday's bombing rose overnight to 80, with most of the casualties in the main bazaar of the town, capital of Baluchistan, near the border with Afghanistan.

Most of the dead were Hazaras, a Shi'ite ethnic group. A senior security official said the figure could rise as 20 people were critically wounded.

"The government knows exactly who is doing what and who is behind all this," said Mohammad Imran, a local trader. "If the government wants (to prevent it), no one can take even a kitchen knife into any market."

POVERTY, CORRUPTION, POWER CUTS
Frustrations with the government have already been growing over its failure to tackle poverty, corruption and power cuts.

LeJ has also said it was behind a bombing last month in Quetta which killed nearly 100 people, one of Pakistan's worst sectarian attacks.

After that attack, Shi'ite leaders called on Pakistan's military to take over security in Quetta and take on the LeJ.

Growing sectarian violence is piling pressure on the government, which already faces a Taliban insurgency, to deliver stability.

"This is a case of barbarity and heartlessness. This is happening because we are divided and not supporting each other," said Malik Afzal, a Sunni student.

"Unless we decide to unite, we will continue to get killed. Today they (Shi'ites) have died. Tomorrow we (Sunni Muslims) will die. The next day, others will get killed."

Shi'ite political organisations have called for a strike in Quetta to protest against the latest carnage. Many shops and bazaars were closed. Relatives of the wounded responded for an appeal for blood made by hospitals.

Pakistani intelligence officials say extremist groups, led by LeJ, want to destablise the South Asian nation and pave the way for a Sunni theocracy in the strategic U.S. ally

More than 400 Shi'ites were killed in Pakistan last year, many by hitmen or bombs. Some hardline Shi'ite groups have struck back by killing Sunni clerics.

The schism between Sunnis and Shi'ites developed after the Prophet Muhammad died in 632 when his followers could not agree on a successor.