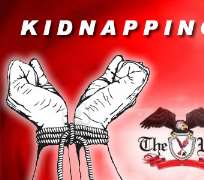 One of those abducted is believed to be a Briton.
In another incident, gunmen also attacked a police station and the headquarters of two local government areas.

One person was killed during the attacks.
Details soon...