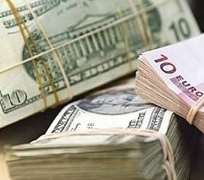 ABUJA, February 14, (THEWILL) - The House of Representatives, Thursday, urged the Central Bank of Nigeria (CBN) to stop the use of foreign currencies as means of exchange in local and domestic transactions in Nigeria.

The decision was arrived at the plenary following the adoption of a motion brought before the House by Hon. Nadu S. Karibu.

In his lead debate, the lawmaker argued that the trend whereby foreign currencies, especially the United States Dollar, is being used for the payment of domestic transactions is weakening the Naira.

"Every country has its currency, which serves as a means of exchange, a symbol of identity, a source of pride, and a sign of fiscal independence and economic stability.

"Without equivocation, the Naira is Nigeria's currency and the only means of exchange for local and domestic transactions known to law in Nigeria.

“ There's a growing trend in the use of some foreign currencies, especially the US Dollar for payments of school fees, hotel bills, real estate, rents and purchase in bars, nightclubs, luxury goods shops etc. in Nigeria," he noted.

Karibo said that the trend has led to the high demand of foreign currencies, especially the US Dollars in Nigeria, "and is contributing seriously to the weakening of the Naira against such currencies, with its resultant negative effects on our economy."

The lawmaker said that the Naira is not accepted as a means of exchange in the United States of America and other countries of which the use of their currencies is becoming a trend in local transactions in the country.

Supporting the motion, Hon. Arua Arunsi (PDP Abia) said it was timely, but that there was a need to present the content in a bill in order to make it illegal for anyone to use the dollar as a means of exchange in Nigeria..

Warman Ogoriba (PDP Bayelsa ) said local transactions should be done in local currency . "Even in South Africa, you cannot pay with the US Dollars, they will insist on the Rand. We need to ban the use of foreign currencies in our local transactions,” he said.

But a member, Chris Eta, said there was no need to ban the use of foreign currencies but to raise the value of the Naira "to raise the confidence of the people in the local currency."

Chairman, House Committee on Works, Hon. Ogbuefi Ozombgachi, in his submission said the currency of any country reflects the value and worth of that country. "With the liberalisation of our economy, foreign currencies play a role in stabilising our economy? The only way to stabilise our economy is to allow a free flow of foreign currencies into our economy,” he said.