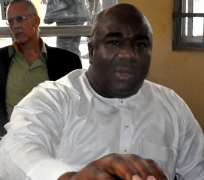 One of the charge reads, “ That you Ikechukwu Amefula, on or about the 10th August 2009 in Abuja, within the jurisdiction of this honorable court obtained credit for yourself by issuing a Zenith Bank cheque No.36879156,for the sum of Twenty Two Million Naira ( N22,100,000) which said cheque when presented for payment within three months of issuance was dishonored due to insufficient fund in your account thereby committed an offence contrary to section1[1]of the Dishonored cheques offences Act Cap 102Laws of the federation of Nigeria and punishable under section1[1][1] of the same Act.”

The accused pleaded not guilty.
The plea was taken after Justice Goodluck set aside the argument of the defence counsel, Henry Akumebu to the affect that the planned arraignment of the accused amount to abuse of court process as the matter was already before another court. Prosecution counsel Shata Jamila Mamman disagreed.

She explained that the matter before the court was a criminal case and not a civil matter. Her lordship, in a brief ruling, noted that there was not formal application to stop the arraignment of the accused.

She said the court could not act in a vacuum just as she noted that the evidence before it was overwhelming to disregard the application to prefer charge.

In her ruling, Justice Goodluck urged the defence to present a formal bail application and ordered that the accused be remanded in Kuje Prison. She then adjourned the case to March 5, 2013.