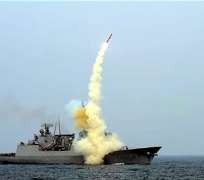 South Korea unveiled a cruise missile on Thursday that it said can hit the office of North Korea's leaders, trying to address concerns that it is technologically behind its unpredictable rival which this week conducted its third nuclear test.

South Korean officials declined to say the exact range of the missile but said it could hit targets anywhere in North Korea.

The Defence Ministry released video footage of the missiles being launched from destroyers and submarines striking mock targets. The weapon was previewed in April last year and officials said deployment was now complete.

"The cruise missile being unveiled today is a precision-guided weapon that can identify and strike the window of the office of North Korea's leadership," ministry spokesman Kim Min-seok told reporters.

North Korea has forged ahead with long-range missile development, successfully launching a rocket in December that put a satellite into orbit.

The North's ultimate aim, Washington believes, is to design an intercontinental ballistic missile capable of carrying a nuclear warhead that could hit the United States.

North Korea, which accuses the United States and its "puppet", South Korea, of war-mongering on an almost daily basis, is likely to respond angrily to South Korea flexing its muscles.

North Korea, technically still at war with the South after their 1950-53 conflict ended in a truce, not a peace treaty, carried out its third nuclear test on Tuesday, drawing condemnation from around the world including its only major ally China.

The test and the threat of more unspecified actions from Pyongyang have raised tensions on the Korean peninsula as the South prepares to inaugurate a new president on February 25.

"The situation prevailing on the Korean peninsula at present is so serious that even a slight accidental case may lead to an all-out war which can disturb the whole region," North Korea's official KCNA news agency said.