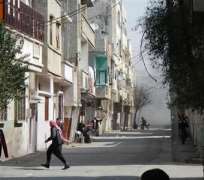 President Bashar al-Assad's forces bombarded the southeast of Damascus with air strikes and artillery on Wednesday to try and dislodge rebel fighters who have gained a foothold in the Syrian capital, opposition activists said.

A Middle East diplomat following the military situation described battles in and around Damascus as a "major engagement", with fighting going back and forth between the two sides.

"The opposition is hitting Damascus from a multiple of directions and the regime is trying to stop it," he said.

Jets bombed Jobar, a neighborhood adjacent to the main Abbasid Square, and the suburb of Daraya on the highway to Jordan to the south, sources in the capital said.

The two areas are part of interconnected Sunni Muslim districts in and around Damascus that have been at the forefront of the 22-month uprising against four decades of family rule by Assad and his father.

Rebels entered Jobar last week after breaching the army's defense lines at the ring road and overrunning several army and pro-Assad militia positions in the district.

The road, a supply line for elite army units dug in in the center of the city, separates the capital from the mostly rebel-held expanse of Sunni towns and suburbs known as eastern Ghouta.

"By being all over Jobar, the rebels are at striking distance in Damascus, but the big question is whether they will be able to hold it," said an opposition activist from the Damascus Media Centre opposition monitoring group,

To the southwest, near the main highway to Jordan, heavy bombardment was reported on the suburb of Daraya, where the army advanced in the last few days, breaking a two-month rebel hold.

The rebels remain entrenched in the south of the district near the main highway leading to Jordan, said Abu Hamza, a member of the Daraya Local Council, which has been administering the suburb since it was taken over by the opposition.

"Daraya is being hit with cluster bombs, vacuum bombs and rockets and we are receiving people for treatment from suffocation in the field hospital,' he said.

"The fighting is fierce on the edge of the town and in the area where regime forces managed to make incursions," he added.

Daraya is part of Muaddamiya, a heavily populated working class Sunni Muslim district, one of multiple Sunni neighborhoods on the edge of the capital that have been at the forefront of the 22-month uprising.

The ruling elite is dominated by members of Assad's family, belonging to the Alawite sect, an offshoot of Shi'ite Islam.

Core Alawite forces from the Republican Guards and the Fourth Division, under the command of Assad's feared brother Maher, have been shelling Sunni areas of the capital and suburbs from the Qasioun Mountain in the center of the city and surrounding hills and also from the Mezze Military airport located near the highway to Beirut to the west.

The rebel strategy appears to target cutting the troops' supply lines, which pass through the ring road and the suburb of Adra to the north east.

The army and a plethora of security forces remain entrenched in fortress-like bases in Damascus and the provincial capitals, where their advantages in air power and heavy weaponry have kept the opposition from taking over the major cities.

The head of the state arms exporter said on Wednesday Russia is still delivering weapons to Syria and will continue to do so.

The Syrian uprising is the bloodiest of the Arab revolts that toppled four autocrats in Libya, Egypt, Tunis and Yemen. The war has deepened the Middle East's Shi'ite-Sunni divide.

Navi Pillay, the U.N. High Commissioner for Human Rights, said on Tuesday the death toll in Syria is likely approaching 70,000 with civilians paying the price for the U.N. Security Council's lack of action to end the war.