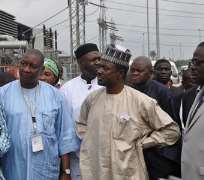 Speaking during the Good Governance Team tour of the Free Trade Zone in Calabar where General Electric is to build a manufacturing and assembly facility, Maku said given the rate major international companies are opening shop in Calabar, the state may soon become the manufacturing hub in West Africa.

He said in the Free Trade Zone alone, there are 69 companies, 43 of which are manufacturing companies.

Maku attributed the inflow of investments into the state majorly to the state’s focused and visionary leadership.

“Cross River is not only known for tourism but is gradually becoming a manufacturing hub for the country and West Africa sub region.

“We have Tinapa, International Convention Centre, Free Trade Zone and now General Electric. It means what Cross River has done for itself from Obudu to Calabar is clear indication of visionary leadership.

“For us these type of investment is an announcement that Nigeria is moving forward and good governance can be seen everywhere. We are not only winning in football, we are also winning clearly in the economic transformation,” he said.

He said the planned investment of $1 Billion by General Electric signifies the confidence the international community has in the Nigerian economy.