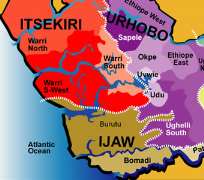 SAN FRANCISCO, February 12, (THEWILL) – Indications of a fresh crisis have emerged between the Ijaws and Itsekiris in the Warri North Local Government Area of Delta State over what is regarded as 'political imbalance' in the area.

In the forefront of the fresh crisis are the Egbema people who claimed that since the creation of Warri North Local Government in 1991, the Ijaws of Egbema had been completely neglected and marginalised in political appointments as well as in the civil service jobs despite the fact that the Ijaws were more in population.

And to pass their message down, they had recently petitioned President Goodluck Jonathan over their perceived marginalisation by the Governor Emmanuel Uduaghan-led administration and their Itsekiri neighbours.

The Ijaws have also been agitating that although their kinsmen in the area outnumbered their Itsekiri counterparts, they are made to play the second fiddle in the politics of the Local Government Council and political appointments for the area.

A petition by a group in the area known as Egbemas For Positive Change (EFPC) and made available to newsmen in Warri read in part; “Since the inception of the Local Government (Warri North), the Ijaws have not by any chance occupied the chairmanship position or any other position, either by appointment or election.

"The same is also applicable to state appointments accruable to the Local Government Area.”

Giving a breakdown of political offices occupied by indigenes of the area in the last 22 years, EFPC highlighted that over 30 posts, including council chairmen, lawmakers at the state and federal levels, secretary to the councils and aides to the governors were all occupied by the Itsekiris.

The group also stated that all 413 former staff of the council as well as 350 of 365 in recent times have all come from the Itsekiri tribal stock, much to the anguish of their Ijaw kinsmen.

They accused Governor Uduaghan of being anti-Ijaw, stressing that in spite of a recent avalanche of protest, he still went ahead to appoint an Itsekiri indigene, Mr. David Edun, as the caretaker chairman of the council.

“Mr. President, this unholy act of the Itsekiri is totally against the spirit and intent of the amended 1999 constitution as provided for in section 14(4) and 15 of the constitution," the petition said as it called for the removal of Edun and his replacement with an Ijaw man.