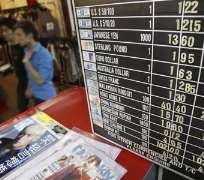 Fiscal and monetary policies must not be directed at devaluing currencies, the Group of Seven nations said on Tuesday in a statement aimed at cooling growing international tensions over exchange rates.

The intervention follows a barrage of rhetoric about a currency war, prompted largely by Japan's new government pressing for an aggressive expansion of monetary policy, which has seen the yen weaken sharply as a result.

Japan said the statement gave it a green light to continue efforts to reflate its economy but a G7 official said it was aimed squarely at Tokyo, prompting the yen to surge.

"The G7 statement signaled concern about excess moves in the yen," the official said. "The G7 is concerned about unilateral guidance on the yen. Japan will be in the spotlight at the G20 in Moscow this weekend."

G20 finance ministers and central bankers meet in Moscow on Friday and Saturday. Some have previously pointed out that the United States has adopted similar policies to Japan.

The G7 powers -- the United States, Britain, France, Germany, Japan, Canada and Italy -- reiterated their commitment to market-determined exchange rates and said they would consult closely to avoid disorderly and volatile market moves which could hurt economic and financial stability.

"We reaffirm that our fiscal and monetary policies have been and will remain oriented towards meeting our respective domestic objectives using domestic instruments, and that we will not target exchange rates," said the statement, released by Britain which chairs the G8 (G7 plus Russia) forum this year.

"It was meaningful for us as (the G7) properly recognizes that steps we are taking to beat deflation are not aimed at influencing currency markets," Aso told reporters.

U.S. and European officials have been concerned about comments from Japanese officials that suggested Tokyo was targeting a specific level for the yen.

But U.S. Treasury official Lael Brainard said on Monday that while competitive devaluations should be avoided, Washington supported Tokyo's efforts to reinvigorate growth and end deflation.

The dollar traded at 94.28 yen before the comment from the G7 official and plunged to a session low of 93.26 after it.

"Rather than calm the markets, the poorly communicated statement has significantly raised volatility and now we have to wait to see the actual outcome of G20 on the weekend," said Richard Gilhooly, fixed-income strategist at TD Securities in New York.

Separately, the Swiss National Bank reiterated its determination to keep a lid on the strong franc, rejected charges it was contributing to a currency war, and said it expected the franc to keep weakening.

WORDS NOT ACTION
Last week, France went as far as calling for a medium-term target to be set for the euro out of concern the exchange rate had become too strong. Berlin rejected that suggestion.

French Finance Minister Pierre Moscovici made little headway at a meeting of euro zone finance ministers on Monday although Germany's finance minister did sound a note of concern.

"There's no foreign exchange problem in Europe," Wolfgang Schaeuble told reporters at the end of a European Union finance ministers meeting in Brussels. "There are concerns that there could be something like this in other parts of the world."

Since late last year, the euro has climbed more than 10 cents from below $1.27. It has subsided in recent days after European Central Bank chief Mario Draghi indulged in a bit of gentle verbal intervention, saying he would monitor the impact of a strengthening currency.

The U.S. Federal Reserve and Bank of Japan are expanding their balance sheets rapidly by printing money, while the ECB's balance sheet is tightening, partly due to banks paying back early cheap money the central bank doled out last year.

All else being equal, that could drive the euro yet higher, the last thing a struggling euro zone economy needs.

Any pain will be just as acute in emerging markets.

As newly minted cash pours into developing economies in search of higher yields, either their exchange rates will rise, making exports less competitive, or they will have to cut interest rates and/or intervene to hold down their currencies.

That could fuel credit and asset price booms that sow the seeds of inflation.

Brazilian Finance Minister Guido Mantega told Reuters last week that the situation could get even worse if Europe joined the currency fray.