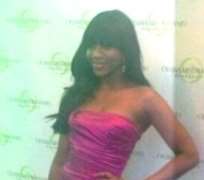 Genny as she's fondly called stepped out in a Dolce & Gabbana dress to the event to the bewilderment of all and sundry. She sure had two companies that day. First, she was sighted chatting up the Hollywood actor, Jefferey Wright and later with the PR consultant, Vanessa Amadi.

Check out the pictures!