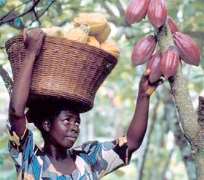 Cocoa and coffee are major agricultural exports in Africa. It is estimated that countries in West Africa, including Ghana derive more than $4.5 billion from the exportation of cocoa annually.

Even though one would expect the afore-mentioned commodities to help boost the economy of the continent, the case is different as most African countries that export the commodities are still struggling to cope with the ever-widening balance of payments deficits.

This, according to analysts, is due to the problem of price uncertainty, which has hit the market in recent times.

Unfortunately, most price changes involving soft commodities have been on the negative side, with very small marginal gains made on very rare occasions.

Attempts by members of the Association of Coffee Producing Countries to boast the price of coffee through retention had failed to achieve the desired objectives over the years.

Based on the current trend, some pundits think that liberalization of the West African commodity sector appears to be the single most significant cause of under-performance in the sector.

Liberalization, they said, had seriously failed West Africa farmers and hindered the development of rural economies.

While acknowledging the importance of the commodity sector to national economies in Africa, experts are calling on the various governments on the continent to adopt measures that would improve price, trade and productions of commodities.

Many argue that given the current climate of uncertainty in the cocoa and coffee markets, there is the need for effective policies to address the precarious situation created for producers by the very low prices offered on the international market.

However, Africa cannot single-handedly provide all answers to its current economic predicament.

Many prominent personalities on the continent are of the view that since Africa is heavily dependent on commodity exports, a dynamic marketing and diversification is needed to revive Africa's agricultural sector.

As an attempt to revitalize what should be a thriving continent, Professor Thomas Kubi, Chief Executive Officer of MCA International Marketing and some other prominent personalities, have decided to set up a Commodity Exchange in West Africa.

To be known as the Economic Community for West Africa States (ECOWAS) Exchange, the venture is expected to operate from Accra this year and would have 15 regional offices across the West Africa sub region.

The exchange, according to Prof. Kubi, is expected to trade in commodities such as cocoa, coffee, cashew nuts, sunflowerseeds, fruits, vegetables, timber, gold diamond and crude oil.

“The prime client base for the exchange would consist of farmers, producers, processors, traders, wholesalers, retailers, buyers, sellers, carriers and transportation companies,” he stated.

Most industry players have already welcomed the move to establish the West Africa commodity trading exchange in Ghana.

The move, according to them, would help deepen Ghana's financial sector, which is gradually becoming a hub in the West African sub region.

Professor Thomas Kubi, who is expected to become the Chief Executive Officer of the West Africa Commodity Exchange when it becomes operational, told CITY & BUSINESS GUIDE in an interview that there was the need to ensure that the central role played by commodities in the sub-region is maintained.

Prof Kubi mentioned that through proper marketing and support structures of the West Africa Commodity Exchange, the commodity market in the sub-region would flourish again.

The total cost for setting up the proposed West African Commodity Exchange in Ghana is estimated at about $500 million.

The good news is that a Swiss credit support firm, Ace Audit & Control Expertise, has already agreed to back the project, with the African Development Bank offering to provide funding.

In addition, two institutions namely London International Financial Futures and Operations Exchange (Liffe) and Cocoa Association of London (CAL) have pledged to support the setting up of the exchange.

The National Democratic Congress (NDC) Government, in its manifesto, pledged to support the setting up of the commodity trading exchange.