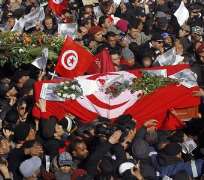 Tens of thousands of Tunisians took to the streets amid scattered violence on Friday to mourn secular opposition leader Chokri Belaid, whose assassination has plunged Tunisia deeper into political crisis.

Braving chilly rain, at least 50,000 people turned out for Belaid's funeral in his home district of Jebel al-Jaloud in the capital, chanting anti-Islamist and anti-government slogans.

It was Tunisia's biggest funeral since the death of Habib Bourguiba, independence leader and first president, in 2000.

Tunisia, cradle of the Arab uprisings, is riven by tensions between dominant Islamists and their secular opponents, and by frustration at the lack of social and economic progress since President Zine al-Abidine Ben Ali was ousted in January 2011.

"The people want a new revolution," shouted mourners in Tunis, who also sang the national anthem.

Crowds surged around an open army truck carrying Belaid's coffin, draped in a red and white Tunisian flag, from a cultural center in Jebel al-Jaloud towards the leafy Jallaz cemetery, as a security forces helicopter flew overhead.

Police fired teargas and shots in the air to disperse youths who were smashing cars near the cemetery, forcing some mourners to run from the choking clouds. Police also used teargas against demonstrators outside the Interior Ministry.

"Belaid, rest in peace, we will continue the struggle," mourners chanted, holding portraits of the politician killed near his home on Wednesday by a gunman who fled on a motorcycle.

Crowds there had chanted "The people want the fall of the regime", a slogan first used against Ben Ali.

CRADLE OF REVOLT
In Sidi Bouzid, the southern town where the revolt against the ousted strongman began, about 10,000 marched to mourn Belaid and shout slogans against Ennahda and the government.

Banks, factories and some shops were closed in Tunis and other cities in response to a strike called by unions in protest at Belaid's killing, but buses were running normally.

Tunis Air suspended all its flights because of the strikes, a spokesman for the national airline said, adding that flights operated by other airlines were not affected.

After Belaid's assassination, Prime Minister Hamdi Jebali, an Islamist, said he would dissolve the government and form a cabinet of technocrats to rule until elections could be held.

But his own Ennahda party and its secular coalition partners complained they had not been consulted, casting doubt over the status of the government and compounding political uncertainty.

No one has claimed responsibility for the killing of Belaid, a lawyer and secular opposition figure.

His family have blamed Ennahda but the party has denied any hand in the shooting. Crowds have attacked several Ennahda party offices in Tunis and other cities in the past two days.

"Hope still exist in Tunisia," Fatma Saidan, a noted Tunisian actor, told Reuters at Belaid's funeral. "We will continue to struggle against extremism and political violence."

She called for national unity, saying: "We are ready to accept Islamists, but they don't accept us."

SECULAR SYMBOL
While Belaid had only a modest political following, his criticism of Ennahda policies spoke for many Tunisians who fear religious radicals are bent on snuffing out freedoms won in the first of the revolts that rippled through the Arab world.

Secular groups have accused the Islamist-led government of a lax response to attacks by ultra-orthodox Salafi Islamists on cinemas, theatres and bars in recent months.

The economic effect of political uncertainty and street unrest could be serious in a country which has yet to draft a new constitution and which relies heavily on the tourist trade.

Mohamed Ali Toumi, president of the Tunisian Federation of Travel Agencies, described the week's events as a catastrophe that would have a negative impact on tourism, but he told the national news agency TAP no cancellations had been reported yet.

France, which had already announced the closure of its schools in Tunis on Friday and Saturday, urged its nationals to stay clear of potential flashpoints in the capital.

"Unless unavoidable, it is best to stay away from the city center today, and steer clear of demonstrations and major road crossings or sensitive buildings," said Helene Conway-Mouret, minister in charge of French people living abroad.

The cost of insuring Tunisian government bonds against default rose to its highest level in more than four years on Thursday and ratings agency Fitch said it could further downgrade Tunisia if political instability continues or worsens.

(For an interactive look at Tunisia please click on link.reuters.com/tub85t )