Paratroops Mutiny In Bamako In Blow To Mali Security Efforts 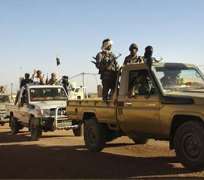 Malian government soldiers fought mutinous paratroops in the capital Bamako on Friday in a clash that threatened to undermine a French-led military operation to drive al Qaeda-allied Islamist rebels from the north.

Local residents fled in panic as heavy gunfire echoed from the Djikoroni-Para paratrooper base on the Niger River in western Bamako as Malian army units with armored vehicles surrounded the camp.

Smoke rose from the base, where mutinous members of the 'red beret' paratroop unit loyal to deposed Malian President Amadou Toumani Toure started firing with their weapons to protest attempts to reassign some of them, Malian officers said.

At least one person was killed, state media reported.

The clash between forces loyal to Mali's current rulers and the Toure partisans revealed splits in the armed forces still lingering after a military coup in March that plunged the previously stable West African state into chaos.

The coup resulted in Tuareg rebels seizing the north in a revolt later hijacked by Islamist radicals. Mali is Africa's third-largest gold producer after Ghana and South Africa.

The Bamako fighting pointed to serious weaknesses in the Malian state which could set back the rapid military gains made by France's four-week-old military intervention in north Mali, which has driven Islamist insurgents from the major urban areas.

The fighting among Malian soldiers also quickly soured the sense of victory for many ordinary citizens, who had been celebrating the success of the French against the Islamists.

"I don't understand how at a moment when French and African forces are here to fight our war in our place ... Malian soldiers, instead of going to fight at the front, are fighting over a stupid quarrel," said one west Bamako resident, Assa, as she ran away from the shooting at the base.

"This is a real shame. I feeling like dropping my Malian nationality," she added.

More than 1,200 km (750 miles) north of Bamako, French and Chadian forces backed by French warplanes are trying to flush the Islamist rebels out of mountain hideouts in the rugged Adrar des Ifoghas range that straddles the border with Algeria.

But in a sign that the Islamist jihadists could fight back with guerrilla tactics, a suicide bomber on a motorbike blew himself up on Friday at a checkpoint north of the Saharan town of Gao, recently recaptured from the rebels.

Besides the dead bomber, the blast injured one Malian soldier, a Mali military officer said.

REBEL GUERRILLA TACTICS
It was the first reported suicide bombing since the French-led military operation launched on January 11 drove the Islamist rebels from their desert strongholds of Gao, Timbuktu and Kidal in northern Mali.

"A kamikaze on a motorbike just blew himself up at the Bourem checkpoint at 6:30 am (1:30 a.m. ET). One lightly wounded soldier from Gao," the officer told Reuters by text message.

Since last year's coup, the elite paratroopers loyal to former President Toure had been largely sidelined and some were arrested following an attempted counter-coup in May.

"The Chief of Staff had taken a disciplinary measure against some of the paratroopers, and some of them were not happy with the decision so they woke up this morning and started shooting," a Malian defense ministry official told Reuters.

In Bamako, groups of the paratroopers, wearing their red berets, had been staging protests to demand that commanders send them to the front to join the offensive against the Islamists.

In May, troops loyal to the March coup leader, U.S.-trained Captain Amadou Sanogo, said they put down a counter-coup attempt by the paratroopers which led to several days of fighting in the riverside capital in which at least 27 people were killed.

In Mali's north, the French-led military operation has involved 4,000 French troops backed by warplanes but Paris intends to start pulling out its forces from Mali in March and wants a U.N. peacekeeping force to be deployed there by April.

France and its western allies are pushing for a national political settlement and democratic elections to stabilize the situation in the West Africa state, where interim civilian leaders have faced interference from March coup leader Sanogo and other junta officers.