Assad's Forces Try To Beat Back Rebels Edging Into Damascus 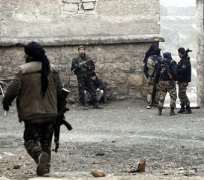 President Bashar al-Assad's forces fought back on Friday in an effort to retake sections of the Damascus ring road from rebels trying to tighten their noose around the capital, opposition activists said.

Rebel fighters based in the eastern Ghouta region broke through defensive lines two days ago, capturing parts of the road and entering the neighborhood of Jobar, 2 km (a mile) from main security installations in the heart of the city.

Assad, battling to crush a 22-month-old revolt in which 60,000 have died, has lost control of large parts of the country but his forces, backed by air power, have so far kept rebels away from the centre of Damascus.

World powers fear the finely-balanced conflict - the longest and deadliest of the uprisings that spread through the Arab world two years ago - could envelop Syria's neighbors, further destabilizing an explosive region.

Heavy fighting was reported at the Hermalleh junction on the ring road just south of Jobar, which had been taken over by the rebels. Fighter jets fired rockets around Jobar, Qaboun and Barzeh districts, the sources said.

Captain Islam Alloush of the Liwa al-Islam rebel unit said opposition fighters did not intend to stay on the ring road and that even if they withdrew from the junction, their new control of surrounding areas rendered the road useless as an army supply line.

"They are fighting off the regime forces but they do not intend to stay at Hermalleh if their losses mount. The objective of this operation is a slow advance toward Damascus," he told Reuters.

SNIPERS
Alloush said opposition forces had deployed snipers in Jobar, where army roadblocks had been overrun or surrounded.

"Control of the Harmalleh juncion is changing hands between the rebels and the army. By attacking the ring road, the rebels have linked Jobar with the eastern Ghouta," said a university student living in Jobar. The eastern Ghouta is a rebel-held expanse of suburbs and farmland adjoining the capital.

Activists said 46 people were killed on Thursday, mostly from army shelling. There were no immediate reports of casualties on Friday.

With a supply line open to military bases on the coast, Assad's core forces from his minority Alawite sect are still based comfortably in the Qasioun mountains on the northwest edge of Damascus, from where they have been shelling the suburbs.

Rebel commanders say they have made mistakes in the past, entering Damascus and other cities without cutting Assad's supply lines first.

Fawaz Tello, a veteran opposition campaigner well connected with rebels in Damascus, said the operation was part of a slow encroachment by rebels on the capital.

"Even if the rebels withdraw from the ring road, it will become, like other parts of the capital, too dangerous for the regime to use it," said Tello, speaking from Berlin.

"We are witnessing a 'two steps forward, one step back' rebel strategy. It is a long way before we can say Assad has become besieged in Damascus, but when another main road is rendered useless for him the noose tightens and his control further erodes."