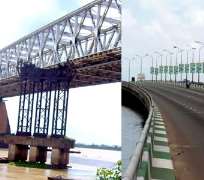 ABUJA, February 08, (THEWILL) - The attention of the Senate on Thursday shifted to the dilapidating state of two major and strategic infrastructures in the country as it directed its Committee on Works to liaise immediately with the Ministry of Works to undertake the reinforcement, repairs and rehabilitation of the River Niger Bridge in Onitsha and the Lagos Third Mainland Bridge in Lagos to avoid tragic consequences of their possible collapse.

The Senate also asked the Ministry of Works to take immediate action and commence work on the Second Niger Bridge before the end of this quarter.

The Senators also asked the Senate Committee on Works and the Ministry of Works to probe the state of theThird Mainland Bridge with a view to arriving at a lasting solution on the 23-year-old bridge.

Uzodimma in his lead debate on the River Niger Bridge stated that since Christmas, commuters have been subjected to excruciating ordeals wherein only single lanes are allowed to ply the bridge at a time for fear that the normal double lane carriage could lead to an instant collapse of the bridge - a development that has resulted in excruciating traffic delays.

Senators in wide-ranging debates queried the present administration's seeming lack of political will to see through the construction of the Second Niger Bridge (The bridge will link Anambra and Delta States).

Senators Chris Ngige, George Akume, Abdullahi Adamu and Gbenga Ashafa faulted the Public Private Partnership (PPP) put in place by the federal government for the construction of the Second Niger Bridge. In separate contributions, they called for political will and declaration of state of emergency on the bridges. Ashafa expressed preference for a concessioning arrangement as opposed to PPP.

On the Third Mainland Bridge, the sponsor of the motion, Ashafa, expressed worry that despite repair works carried out on the bridge by the works ministry last year, there have been incessant complaints of shifting and unusual vibrations on the bridge by commuters plying the bridge for quite some time.

"A report produced by a company experienced in underwater surveys indicated that the underwater metal casing, housing the concrete piles on which the bridge stands have rusted and this accounts for the vibration experienced in some portions of the bridge," Ashafa said.

Ashafa accused the Ministry of Works of carrying out "mere window dressing" on the expansion joints of which reports have confirmed that some parts had since become disjointed.

In other debates, Senator Oluremi Tinubu (Lagos/ACN) stated that with utmost priority, the limited scope of work done on the Third Mainland Bridge last year calls for re-assessment of the health of some of the most important bridges in Nigeria.

"If we truly value citizen's lives, the prevailing concerns about a critical infrastructure like Third Mainland Bridge cannot be dismissed with a wave of the hand. The bridge collapse can lead to huge loss of lives and worsen traffic situation in Lagos, the commercial hub of Nigeria," she said.

Senate President, David Mark, said the Senate will welcome a supplementary budget for the short-term rehabilitation of the Third Mainland Bridge and the River Niger Bridge after due interface between the Senate Works Committee and the Ministry of Works..

It would be recalled that in 2011, President Goodluck Jonathan promised Ndigbo leaders led by former vice president, Alex Ekwueme, that the Second Niger Bridge will be completed before the end of his tenure in 2015.

The bridge linking Anambra and Delta States is expected to be completed in 16 months.

Also, the Deputy Speaker of the House of Representatives, Emeka Ihedioha, had alleged last December that the N250 billion appropriated by the National Assembly for the construction of the Second Niger Bridge in 2008 was diverted "for other purposes" by the Ministry of Works.