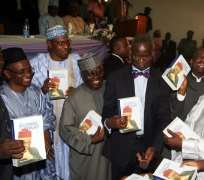 ABUJA, February 08, (THEWILL) - Lagos State governor, Mr. Babatunde Fashola and his Niger State counterpart, Alhaji Babangida Aliyu as well as the convener of Save Nigeria Group (SNG), Pastor Tunde Bakare, Thursday in Abuja, showered encomiums and subtled recriminations on the former Minister of the Federal Capital Territory (FCT), Mallam Nasir el-Rufai, over his new book with Bakare saying the former minister has opened a can of worms through the book.

While Fashola lamented that Nigerians were beginning to lose a sense of explanation for why things happen the way they do in the country. Aliyu, who extolled el-Rufai for his forthrightness, said the book; “Accidental Servant”, has rubbished insinuations that the former minister was ambitious.

On her part, former Minister of Education, Dr. Oby Ezekwesili described el-Rufai whose book was formally launched at the Yar’Adua Centre, Abuja as a quintessential non-conformist and public servant.

Bakare who told the gathering that he was overwhelmed by the book and cried in the course of reading it, declared that; "we have vilified our heroes and hailed our villains". Bakare,who bought 500 copies of the book, promising to distribute them to SNG, as well as the Christian Association of Nigeria (CAN) leadership, described el-Rufai as a hero for speaking against corruption in the polity, saying through the book the former minister has opened a can of worms.

Fashola, on his part, said the book has opened a discourse on the state of the public service in the country. While extolling the audacity of the el-Rufai, he however lamented that Nigerians are beginning to lose a sense of explanation for why things happen the way they do in the country.

“For me this book is about how the most important sector of our lives, the public sector, is managed and mismanaged, about how projects fail and how they succeed, about errors that were made and successes that were recorded. These are things that are in short supply. I remember when I was preparing to run for office, apart from books by Chief Obafemi Awolowo on how projects were conceived and delivered, I had to look for references abroad. But this book will fill that vacuum, “ he said.

Fashola noted that the book will promote the compelling need to ensure that allocation of huge purse is given to only competent people. “We have demonstrated responsibilities in small sectors but those sectors don’t have responsibility to generate power. So our compelling necessity is to find a way to bring back those champions in the private sector to the public sector because that is where the greatest impacts are made," he said..

Speaking at the launch, Niger State governor, Aliyu, who extolled el-Rufai for his forthrightness, said the book has rubbished insinuations that the former minister was ambitious, adding that the bluntness of the book does not portray the former minister as one who seeks government patronage to get into office.

Also speaking at the event, which attracted a broad spectrum of Nigerians mostly from the opposition political class, Ezekwesili who was the Chairperson of the Book Presentation Committee, said “the thing about Nasir is that he is a quintessential non-conformist. I know that the chairman of the occasion has already said that, but he is the epitome of non-conformism. When you have an opinion or you disagree with him, one thing you cannot take away from him is his fearlessness to stand on the conviction that defines his personality.

“When I started reading the book during my trip to India I called him and said ‘are you okay’? And he said ‘my sis God made you not to pay attention because He would have made you stop certain things’.

“Nasir elrufai is a quintessential public servant. He calls himself an accidental public servant. But the fact is that the public sector is the engine that drives the mission of any nation. And one nation that we like to compare and talk about is Singapore. It is very important. It is an example of how public sector raised a sense of competency and capacity and drives to change the nation,” she said.

Ezekwesili further noted that the Public sector impact spans the economic, social or security sphere and as such she called for the return of intellectual capacity that the public sector was renowned for, adding that it was critical to the development of the country.

She however noted that the book was going to draw responses from persons who were not comfortable with the content, but observed that the expose would further enhance the platform for more constructive discussion on the state of the nation. Commending the kind of spread the book raised, she further called on those who have occupied public offices to write about their experiences in government, saying it was important for the development of democracy.