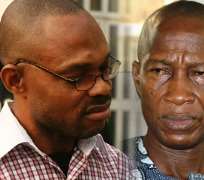 The suspects allegedly collected N9.1million from one Linus Eze as the cost of clearing two 40 feet containers containing LG brand of Air conditioners and Completely Knocked Down ( CKD) spare parts without delivering the items to him.

One of the charges reads; “ that you Nnaemeka Osegbo and Prince Friday Obah (aka Prince and Princess Inter Limited) at Lagos within the Ikeja Judicial Division with intent to defraud, obtained the sum of N7,123,000.00 (Seven million, One Hundred and Twenty Three Thousand Naira) from Mr. Linus Eze by falsely pretending to Mr. Linus Eze that the money represent the cost of two (2) overtime 40 feet containers containing LG Brand of Air conditioners and completely knocked down ( CKD) spare parts which pretence you knew to be false”.

When the charge was read to them, the defendants pleaded not guilty.

EFCC counsel, Musa Isah, prayed the court for a trail date and that the accused persons be remanded in prison custody. However, counsel to the first defendant, Kazeem Lukman prayed for an adjournment to allow him time to file application for bail.

Justice Akinlade adjourned the case till April 16, 2013 for trial and remanded the accused in prison custody. She however ruled that if application for bail was filed before the trial date, the court will fix another date for bail hearing.