Lagos - A Federal High Court in Lagos on Thursday remanded 11 fishermen on a four-count charge of conspiracy, theft, unlawful possession of petroleum products and vandalism of pipeline belonging to the NNPC.

The accused who were arraigned by the police denied the charges and pleaded not guilty to the offences. 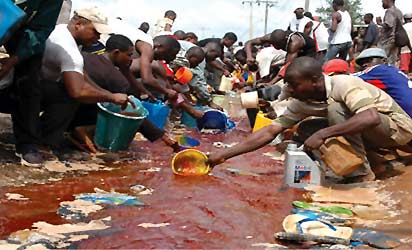 *File Photo: Activity at a vandalised oil pipe
The prosecutor, Mr Justin Enang, told the court that the accused were arrested by a team of policemen on surveillance on Dec. 21, 2012 at the Atlas Cove, Lagos State.

According to the prosecutor, about 220 drums containing petroleum products valued at N5.335 million were recovered from them.

He said that the alleged offences contravened sections 390 and 516 of the Criminal Code, section 17(a) and ( b) of the Miscellaneous Offences Act.

Counsel to the accused, Mr MC Anthony, prayed the court to grant the accused persons bail on liberal terms as they knew nothing of the alleged offence.

He said that they were ordinary fishermen who were going about their business when they were arrested.

The prosecutor, however, objected to the bail application moved by the defence counsel and urged the court to remand the accused.

He said that the offences were about economic sabotage and should not be treated lightly.

Enang also argued that were the accused to jump bail, it would be difficult to trace them since they had no permanent address.

After listening to the submissions of both counsel, Justice Musa Kurya ordered that the accused be remanded in prison custody.

The case was adjourned to Feb. 11 for further mention. (NAN)