Delta Revenue Board Targets N61bn In 2013 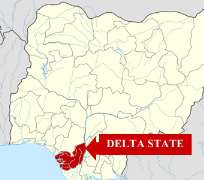 ... Begins Audit of 25 LGAs
SAN FRANCISCO, February 06, (THEWILL) – The Delta State Board of Internal Revenue (DBIR) has set an ambitious target for itself this year, saying it would stop at nothing to rake in N61 billion revenue for the state government.

The setting of the target came as the Revenue Board began a full-scale audit of the finances of the 25 Local Government Areas of the state to ascertain the level of their compliance with remittance of tax deductions.

The Chairman of the Board, Hon. Joel Onowakpo Thomas, who disclosed all these, said with the N61billion revenue target for the 2013 fiscal year, the board had taken a holistic assessment of its operations and measures to block all loopholes to ensure that the target for this year is attained.

He said the ongoing exercise which commenced on Monday became necessary due to the realisation that some of the councils were not remitting taxes collected on behalf of the board.

According to him, the board was liaising with the state’s Local Government Service Commission and the Auditor General (LGs) towards finding a common ground on the issue of revenue generation and remittance.

“Basically, the three offices have come together and agreed on a working modality to embark on audit exercise of the 25 Local Government Areas in the state in order to determine their level of compliance with regards to the remittance of the revenues generated," he said.

While noting the various challenges facing the board at the Local Government offices, the Revenue Board chairman said most of the Local Governments have derailed from the provision of the law, as they do whatever they like with the revenue generated without remitting them to the board

He said the audit was necessary to unearth hidden aspect of the provision of the state’s tax law in councils’ practices.

The DBIR boss said there was the need to expand the revenue base of the state government in line with the policy thrust of the governor, Dr. Emmanuel Uduaghan, tagged “Delta Beyond Oil”, rather than relying solely on federal allocation which is determined oil revenue.

“Mono economy is not good for any person or government. So we should be able to create alternative source of revenue beyond oil. This is the philosophy of the governor and he is seriously building capacity towards that, “ he said.