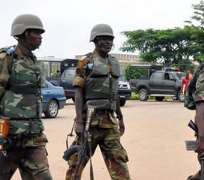 SAN FRANCISCO, February 06, (THEWILL) – The military in Kano Wednesday night raided a hideout in the Dorayi Quarters of Kano State and took three terror suspects into custody. One of those arrested is believed to have participated in the fatal attack on the Emir of Kano and his convoy a few weeks ago.

Spokesman of the JFT, Captain Ikedichi Iweha, declined to comment on the operation when THEWILL sought more information.