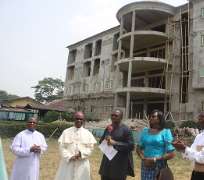 The National Association of Catholic Diocesan Directors and Secretary of Education yesterday presented the Distinguished Education Merit Award to Governor Obi for his contributions to the growth and development of education in Nigeria.

They said that even beyond education that the governor had proved himself a great administrator, courageous leader and a real Christian in governance by his ever readiness to live out the ethics of Christ.

Presenting the award on behalf of the association, the Catholic Bishop of Onitsha Rt. Rev. Valarie Okeke during the a church service at the Basilica of the Most Holy Trinity Onitsha yesterday said he did not expect anybody who had followed Governor Obi development strides in Anambra, especially in the area of education, health care, general infrastructure and restoration of values to be surprised at the award, insisting that it is a square peg in a square hole.

Speaking further, the Cleric said Governor Obi had shown unequal commitment in developing the human person and in building a stable and progressive society. He also noted with joy and commendation, the improved and improving standards in Anambra schools since they were returned to their owners, backed by Billions of Naira in grant by the governor.

After the service, Governor Obi also inspected the Maternity Complex and the School of Nursing the State government is constructing at the Holy Rosary Hospital Waterside, Onitsha. He expressed satisfaction at the progress of work in both buildings, describing the partnership with the Church as one of the best things that has happened to his government. He said he now sought more partnership that impacted positively on the State.

Presenting a cheque of 10 million Naira to the Archbishop for continuation of work, he said the State government would soon start another building within the complex in line with her commitment to continue working for the good of the people.