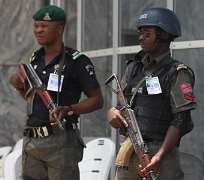 The journalists were arrested , Wednesday, on the orders of the Principal, Federal Science and Technical College, Aka Offot, Mrs. Teresa Nweke, over a story they were investigating about an alleged rot at the school.

The journalists,who had been waiting for Nweke in her office were called in at about 11 am only for the principal to invite the police, alleging that she was being harassed by the journalists.

Immediately,persons claiming to be policemen in mufti with horsewhip from the ‘C’ Division of the state police command came in to arrest the newsmen.

But the detained journalists said they had gone to seek the reaction of the Principal on the 2011 West African Examination Council (WAEC) results of the school in which 39 out of 135 students passed at credit level in Biology, and five out of 135 in Chemistry thereby prompting mass withdrawal of students from the school.

Leader of the police team who identified himself as Mr. Emmanuel and claimed to be the DCO ordered that the journalists be taken to the police station for questioning for daring to interview the Principal.One of the journalists who attempted to escape was pushed back and forcefully detained in the principal’s office for over 30 minutes.