US blames Nigeria leaders for extremism 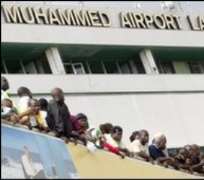 
US Secretary of State Hillary Clinton has blamed failings by Nigerian leaders for increasing "radicalization" among young Nigerians.

She pointed to poor living standards and "unbelievable" corruption.

Mrs Clinton was speaking after a young Nigerian man from a wealthy family was accused of trying to blow up a plane over the US on Christmas Day.

She said she believed that bombing suspect Umar Farouk Abdulmutallab was "disturbed by his father's wealth".

The Nigerian government has not responded to Mrs Clinton's criticism.

Anti-state uprisings
Nigeria is one of the world's biggest oil exporters but most of its people live in poverty.

With its large impoverished Muslim population and oil industry, Western diplomats have long feared that Nigeria could be a prime target for al-Qaeda.

Mrs Clinton was speaking at a "town hall" meeting with state department officials.

"I do think that Nigeria faces a threat from increasing radicalization that needs to be addressed, and not just by military means," she said.

"There has to be recognition that, in the last 10 years, a lot of the indicators about quality of life in Nigeria have gone the wrong direction.

"The information we have on the Christmas Day bomber so far seems to suggest that he was disturbed by his father's wealth and the kind of living conditions that he viewed as being not Islamic enough."

Following the alleged plot, security screening for Nigerians travelling to the US has been tightened.

Nigeria's government has condemned the measures, saying 150 million Nigerians should not be blamed for the actions of one man.

Nigerian officials have also sought to distance their country from the alleged bomber - stressing that he left the country 10 years ago.