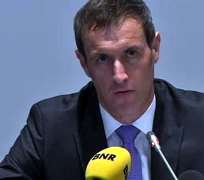 A Champions League tie played in England is one of 680 matches across the world investigators say was fixed.

European police did not reveal the identity of the match they believe was corrupt in England.

But Europol did say that they had uncovered an organised crime syndicate based in Asia that was co-ordinating the operation.

Some 425 match officials, club officials, players and criminals are suspected of being involved.

At a news conference in The Hague, Netherlands, Europol claimed:

- The fixed Champions League tie in England took place in the "last three or four years";

- The identity of that match cannot be revealed due to "ongoing judicial proceedings";

- In Germany-based matches alone, criminals wagered £13.8m (16m euros) on rigged matches and made £6.9m in profits. Officials fear this is as the "tip of the iceberg";

- In total 380 suspicious matches were in Europe and a further 300 in Africa, Asia and south and central America.

Rob Wainwright, director of Europol - the European Union's law enforcement agency, said:"This is the work of a suspected organised crime syndicate based in Asia and operated with criminal networks around Europe.

"It is clear to us this is the biggest-ever investigation into suspected match-fixing in Europe. It has yielded major results which we think have uncovered a big problem for the integrity of football in Europe.

In addition to the £13.8m wagered on Germany-based matches, payments of £1.73m are thought to have been paid to those involved.

Financial details were not given from the other countries said to be involved, except that the biggest payment to an individual was in Austria for a total of £121,000.

Europol believes a crime syndicate based in Singapore was liaising with criminal networks throughout Europe, adding that match-fixing has taken place in 15 countries and 50 people have so far been arrested.

In total, 30 countries and close to 700 matches worldwide were examined.

Many of the allegations involved matches in lower divisions around Europe.

German police described a global network involving couriers ferrying bribes of up to £86,000 per match around the world, paying off players and referees.

Most cases have been discovered in Germany where 14 people have been jailed for a total of 39 years.

Criminal convictions have also been secured in Finland, Hungary, Slovenia and Austria.

Asked specifically about the allegations surrounding the Champions League tie held in England, Wainwright declined to identify the match because of "ongoing judicial proceedings".

However he did say it happened in the last three to four years, adding: "The focus has been on other countries, not the United Kingdom. However we were surprised by the scale generally of the criminal enterprise and just how widespread it was.

"It would be naive and complacent of those in the UK to think such a criminal conspiracy does not involve the English game and all the football in Europe."

It later emerged that neither the Football Association nor Uefa had been aware that Europol's investigation was taking place.

A spokesman for The FA said it was "not aware of any credible reports into suspicious Champions League fixtures in England, nor has any information been shared with us.

"While the Champions League comes under Uefa jurisdiction, The FA, alongside the Premier League, Football League and Conference, monitor markets for the top seven leagues and three major cup competitions in England and take matters of integrity in football extremely seriously."

It is understood Uefa is similarly unaware of an investigation into a Champions League match in England.

A Europol spokesman said he was unable to comment when asked why neither the FA nor UEFA had been informed.

A Uefa spokesman said it would co-operate with the investigation though. He said: "We will be liaising with Europol in relation to any reports of match fixing in European competition."