Is Guantanamo a modern colonial exhibition? 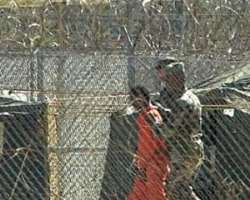 (september11news.com) The real 'oddity' is the Guantanamo Exhibit itself. It is uncivilized and primitive.
Listen to article

By Dallas Darling
During the Age of Imperialism, when the Western Powers were carving out colonies in Africa, Asia, and Latin America, it became very fashionable to host colonial spectacles known as international exhibitions. England, France, Germany, Italy, Belgian, and the United States proudly displayed their progress by showing the latest technologies and “advanced” weaponries, along with their fine arts, innovations, and manufactured goods.

The first of these exhibitions, or fairs, was the Great Exhibition of the Works of Industry of All Nations held in Hyde Park, London. Over 100,000 domestic and foreign exhibits were housed in a massive, glassed-in space, which was as much a marvel of industrial technology as any of the machines or goods displayed inside.(1) The structure, which was called the Crystal Palace, inspired competition from other “modernized” nations. Between 1851 and 1940, there were over 100 exhibits similar to the one in London.

In the U.S. alone, Philadelphia, Chicago, St. Louis, New York City, and San Francis, just to name a few, hosted exhibitions that boasted of U.S. superiority and the rightness of the colonial system, including the exploitation of foreign resources and cheap labor. Through visual representations like photography, publications, and mass-production of souvenirs, U.S. imperial ideologies, technological progress, and the justification of expansionist wars were embraced by large audiences.

An important part of the exhibitions were the displays of cultural artifacts belonging to societies of colonized peoples. Masks, potteries, carvings, and textiles left those who attended with a selective view of the colonized. The most shocking form of colonial exhibitions were the displays, or commodifications, of living human beings.(2) Through years of carnivals and traveling circuses that showed “freaks” and the deformities of nature, Western colonialism simply supplied a new source of strange and exotic persons.

Like zoological specimens, Eskimos, Native Americans, and people from Africa and Asia, along with certain aspects of their culture, were displayed as oddities. They were often compared to the “civilized” world and denigrated too. Some “owners” and animal trainers incorporated panoramic back drops with live animals. The “exotic” people were taught how to behave and act. Audiences were either awed or amused as they watched dramatic performances.

The purpose of international exhibits were not only to make money, but to contrast more “primitive” cultures with “advanced” Western civilizations. They were used to stress the importance of racial supremacy and national inheritance and to prove the correctness of Western imperial progress. Most importantly, these fairs asserted the differences between the Western Powers and what was thought to be more primitive peoples and societies. By dehumanizing the colonized and devaluing their cultures, Western civilizations constructed new realities(3) in order to support brutal imperial and murderous military campaigns.

As the Guantanamo Detention Camp marks the beginning of its ninth year, in which hundreds of suspected “terrorists” (captured in the U.S.-led war on terror) were paraded, tortured, denigrated, indefinitely detained, dehumanized, and deprived of their most basic and fundamental rights, is it not a modernized colonial exhibition? Is it not a carnival-like exhibit, that tries to demonstrate U.S. progress and technological innovations? Is it not a Steel Palace, that attempts to display an “advanced” civilization as compared to primitive societies and less civilized cultures?

Yet it seems the Guantanamo Exhibition has backfired. Torture, forced suicides, and the violent suppression of hunger strikers and demonstrators have caused more anger, hatred, and retaliation. Like its architects who believed they were above international law, plus the World Court, United Nations International Court of Justice, and the Geneva Conventions, the Guantanamo Exhibit acts and behaves as if it too is above the rule of law. It is contrary to the natural rights of life, liberty, and the pursuit of happiness. All along, and in an ironic sort of way, the United States has been on display, a national exhibit.

Even though over 500 prisoners have been released from the Guantanamo Exhibit-many of them falsely accused by others for bounty money, or captured by mistake-there are still almost 200 being detained. They are from Iraq, Saudi Arabia, Yemen, Pakistan, Somalia, Afghanistan, Sudan, and other parts of the world. Not only does the Guantanamo Exhibit parade human trophies from conquests, but it is an exhibit that reveals the raw and brutal nature of American exceptionalism and hegemony. The Guantanamo Exhibition celebrates and boasts in American superiority, at least in the minds of some politicians and citizens.

The real “oddity” is the Guantanamo Exhibit itself. It is uncivilized and primitive. It sits on occupied land-a territorial trophy, which was seized from a sovereign nation, Cuba, during another illegal. Those who are troubled with its closure have experienced a reverse type of imperialism and colonization. They are imprisoned by an ethnocentric heart and detained by violent ideologies. Like past exhibits of zoological specimens, which consisted of living human beings, the Guantanamo Exhibit is immoral, illegal, and unnatural. It will forever remain a blight on humanity.

-- Dallas Darling is the author of Politics 501: An A-Z Reading on Conscientious Political Thought and Action, Some Nations Above God: 52 Weekly Reflections On Modern-Day Imperialism, Militarism, And Consumerism in the Context of John's Apocalyptic Vision, and The Other Side Of Christianity: Reflections on Faith, Politics, Spirituality, History, and Peace. He is a correspondent for www.worldnews.com. You can read more of Dallas' writings at www.beverlydarling.com and wn.com//dallasdarling.