Even in defeat, Didier Tebily Yves Drogba was graceful. Despite swallowing the bitter pill of defeat that has dented his beautiful career - without a Nations Cup trophy, the Ivorian has sent a passionate plea to the Super Eagles

'Please, win the Nations Cup for us', he pleaded as he hugged Stephen Keshi and his former teammate Mikel Obi after the 2-1 defeat in the quarter final match at Rustenberg. 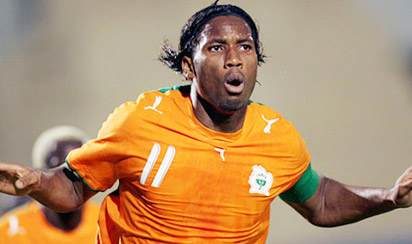 Drogba
Drogba's army of super stars were tipped by all and sundry to win the match against a relatively young and inexperienced Super Eagles. The Eagles stepped up their game and were immaculate in their form, attack, defence and discipline. They stung Cote d'Ivoire and have made their critics to swallow their words.

Ex-international, Peterside Idah who witnessed the emotional embrace and discussion said that he was touched by Drogba's professionalism.

'It was an emotional meeting and I was very proud of the Super Eagles. We should learn to appreciate our own.

The South Africans lost but they still love their Bafana Bafana', the former goalkeeper-turned analyst and Pastor said as many people hugged him and congratulated him.