gives grant to about 50 old people
By Mazi Odera 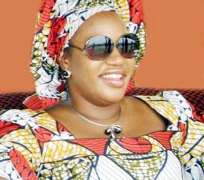 Wife of the Anambra state Governor, Mrs Margaret Peter-Obi yesterday announced that the Anambra state government has concluded plans to start a monthly welfare package for non pensionbale elderly in the state from age 75 and above.

Mrs Obi who announced this during the celebration of the Elderly at the Women Development Center Awka, organized by the Ministry of Women Affairs and Social Development, gave grants of N10,000 each to two elderly people from each of the 21 local government areas of the state.

Obi's wife represented by the Senior Special Assistance to the governor on Social Re-orientation Mrs Mitchelle Onugbolu said the event as a day set aside to celebrate the old people in the state and noted that Governor Peter Obi's administration is geared towards improving the life of the aged.

"The continued improvement in the quality of life pursued by this administration will surely add more years to the life span of our citizens especially the elderly', Onugbolu stated.

Commissioner for Women affairs And Social Development, Lady Henrietta Agbata, in her opening remarks said that the government has put together the events of today to celebrate the senior citizens that spent the productive years of their lives faithfully serving Anambra State, the Light of the Nation.

Agbata said ,"Although the care of older persons in African society rest squarely on the extended family system, the state government has made the extra efforts to provide for the needs of older citizens to augment their welfare.

She said that the Obi administration now pays pensioners promptly, and that ''Mega/Micro-credit loan scheme launched earlier by the governor to provide funds that older citizens could draw from to initiate new ventures or strengthen existing business'.

Lady Agbata announced that Gov Obi has approved another grant for two persons in each of 21 local governments today.

"I wish to thank every organizations especially the Church and other NGOs for the elderly, for their special contribution to the welfare of the old people in our midst".

The celebration of the elderly is an annual ritual by the Obi administration as handled by the office of Her Excellency through the Ministry of Women Affairs and Social Development. And at each celebration not less than 2 elderly each from each of the local government areas of the state will be given a minimum of N10,000 each as empowerment grant.

Commissioner Okunna confirmed that they discussed the issue of monthly grant to aged people between the age of 75 and above at their last executive council meeting. She said they agreed to put up measures in place to care and manage the old people of the state from the age of 75 years and above providing their daily needs.