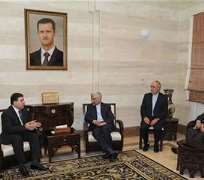 The Syrian opposition leader met the foreign ministers of Russia and Iran on Saturday, opening a window to a possible breakthrough in efforts to broker an end to Syria's civil war.

Russia and Iran have been the staunchest allies of Syrian President Bashar al-Assad throughout an armed uprising, and any understandings they might reach with Assad's foes could help overcome the two sides' refusal to negotiate.

At an annual international security conference in Munich, Syrian National Coalition leader Moaz Alkhatib had talks with Russia's Sergei Lavrov that may have been made possible by Alkhatib signaling readiness to talk to Damascus.

"Russia has a certain vision but we welcome negotiations to alleviate the crisis and there are lots of details that need to be discussed," Alkhatib said after the meeting.

After a 45-minute meeting with Iranian Foreign Minister Ali Akbar Salehi, Alkhatib told Reuters: "We agreed we have to find a solution to end the suffering of the Syrian people."

Alkhatib's purpose in his meetings was "to discuss finding a way to remove the regime with the least possible bloodshed and loss of life," he said.

Russia has blocked three U.N. Security Council resolutions aimed at pushing out Assad out or pressuring him to end the civil war, in which more than 60,000 people have died. But Moscow has also tried to distance itself from Assad by saying it is not trying to prop him up and will not offer him asylum.

"The talks about Syria are intensifying and the Iranians have been drawn in. Let's see how it all ends," one diplomatic source said, speaking on condition of anonymity.

"BIG SIGNAL"
Alkhatib put his authority within the opposition movement at risk earlier this week when he broke ranks to say he would be willing to meet Syrian officials to discuss a transition if political prisoners arrested during the uprising were freed.

The opposition coalition's 12-member politburo then told Alkhatib not to respond to any proposals made in Munich without consulting with them first, with one opposition source citing concern that Alkhatib's move would damage the revolt's morale.

She also voiced concern that Iran had recently increased military support for Assad.

While some headway was apparently being made in Munich, Iranian media said that Saeed Jalili of Iran's Supreme National Security Council had traveled to Damascus to meet officials and help Assad "stand against plots hatched by global arrogance" - an allusion to the United States and other Western powers.

A comment by Russian Prime Minister Dmitry Medvedev this week that Assad's chances of staying in power were getting "smaller and smaller" was regarded in some quarters as a sign of a shift in the Kremlin's Syria policy.

At the same time, Syrian opposition figure Hassan Bali, in Munich as an independent observer, called Alkhatib's meeting with Biden "a big signal from the Americans" that they were upgrading support for rebels fighting to topple Assad.

Biden said he had urged Alkhatib "to isolate extremist elements within the broader opposition and to reach out to, and be inclusive of, a broad range of communities inside Syria, including Alawites, Christians and Kurds".

LACK OF LEADERSHIP
There was little evidence at the Munich conference that the U.S. and Russian positions on Assad were getting any closer.

"The persistence of those who say that priority number one is the removal of Assad is the single biggest reason for the continuing tragedy in Syria," Lavrov told the conference.

Biden on the other hand said the White House was "convinced that President Assad, a tyrant hell-bent on clinging to power, is no longer fit to lead Syrian people and he must go".

Russia is Assad's main arms supplier and, with Iran, has been among his strongest supporters during the 22-month-old conflict, which began with peaceful protests and evolved into civil war after Assad tried to crush unrest by military force.

U.S. Republican Senator John McCain, a long-time critic of the Obama administration's reluctance to intervene in Syria, said in Munich that the United States and its allies had "stood by and watched the massacre of 60,000 innocent people".

McCain told reporters Obama should have explained to the American people the need to intervene - but that "requires leadership", he said. "And so far there is no American presidential leadership