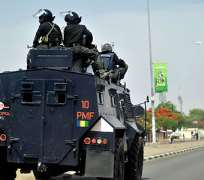 SAN FRANCISCO, January 31, (THEWILL) - An attack on a security check point in Gombe has left two policemen dead while a beggar plying his trade within the vicinity sustained injuries.

The hoodlums were said to have opened fire at a group of policemen, Thursday morning around the central roundabout in the town,during a stop and search operation.

The spokesman of the Gombe State Police Command, Fwaje Atajiri, a Deputy Superintendent of Police, while confirming the incident, said security in the area was usually fortified with two patrol vehicles and a rapid response squad of Gombe Central Division.

He disclosed that the gunmen struck after the reinforcements had left the area at about 6:30am.

Attajiri however assured that the long arm of the law would soon catch up with the hoodlums as he disclosed that investigation into the matter had begun.

While appealing to the general public to remain calm in view of the attack, the police assured residents of the state that the security of their lives and property is guaranteed.

The state Police Command also implored residents to always give useful information to the police, noting that the criminals reside in their midst.