Saraki Sues For Peace In Kwara As Two Communities Clash 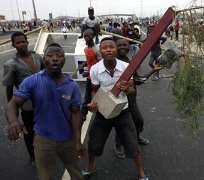 SAN FRANCISCO, January 30, (THEWILL) – Senator Bukola Sakari has appealed for calm amongst the people of Offa in Offa Local Government and Erin-ile in Oyun Local Government of Kwara State following the violence that erupted today in the communities.

Casualty figures are still uncertain but a popular hotelier and politician is believed to have been violently killed.

The former Governor of the state and current Senator representing Kwara Central charged the people of the communities to give peace a chance and live harmoniously among themselves.

He urged the people to cooperate with the Government in finding lasting solution to the problem.

Senator Saraki also called on the traditional rulers of the two communities (Olofa of Offa and Elerin of Erin-Ile) to appeal for calm and call their people to order in the interest of peace, whilst also commending the state government for immediately sweeping to action by deploying appropriate security agencies to help restore peace and order.