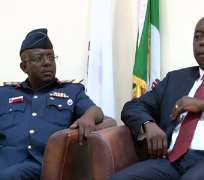 SAN FRANCISCO, January 30, (THEWILL) – The Executive Chairman of Economic and Financial Crimes Commission, Ibrahim Lamorde has advocated regular anti-corruption training for military personnel across the country as part of efforts at curbing the menace of corruption in Nigeria.

He made the call on Wednesday January 30, 2013 when members of the Senior Command Course 35 of the Command and Staff College, Jaji, Kaduna state visited the EFCC Academy, Karu, Abuja.

The EFCC boss who was represented by the Commandant of the EFCC Academy, Mr. Ayo Olowonihi briefed the visitors, led by Air Commodore James Illiyasu, on the responsibilities of the academy which include law enforcement training for the EFCC and other agencies; and capacity development courses for Financial and designated non- financial institutions and other stakeholders.

He revealed that EFCC’s basic training runs for eighteen months during which the cadets go through rigorous studies and physical exercises before their mentorship at various sections like Advance Fee Fraud, Economic Governance, Bank Fraud and Counter Terrorism and General Investigations where they spend three months each.

The Commandant also gave an indication that the academy despite challenges, plan to expand its programmes to accommodate the training needs of other law enforcement agencies the West African Sub-region.

Responding, Commodore Illiyasu expressed his delegation’s appreciation for the hospitability accorded them. He said they were at the academy to deepen their understanding of the workings of the EFCC. He expressed delight that the Commandant addressed all the burning issues.