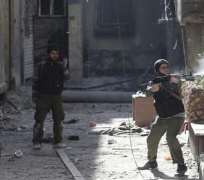 The Syrian army has stepped up an offensive on opposition Sunni Muslim strongholds in the central city of Homs, bringing in ground forces and loyalist militia to try to secure a major road junction, opposition sources said on Friday.

Around 15,000 Sunni civilians are trapped on the southern and western edge of the city near the intersection of Syria's main north-south and east-west arteries, crucial to let the army travel between Damascus and the Mediterranean coast, opposition campaigners in Homs said.

Rebels said they had moved into new areas of Homs this month to grab more territory, which could explain the offensive. Activists said that rebels had asked them not to report on the advances because it could provoke retaliatory strikes.

But activists in Homs said a barrage of army rocket, artillery and aerial bombardment had killed at least 120 civilians and 30 opposition fighters since Sunday.

In the south, eight members of Syria's military intelligence were killed by an Islamist militant car bomb on Thursday night near the frontier with the Israeli-occupied Golan Heights, opposition activists and a violence monitoring group said on Friday.

The Syrian Observatory for Human Rights said the bomb was planted by Al-Nusra Front, a rebel unit fighting to oust Assad that the United States has labeled a terrorist group.

"We think the blast might have killed a colonel who has been leading the fight against rebels in the area," Rami Abdelrahman, head of the Britain-based Observatory said. The building targeted is in the town of Saasa, 14 miles (23km) from the frontier with the Golan Heights, he said.

Syrian authorities have banned most independent media, making it difficult to verify such reports on the ground.

The nearly two-year-old conflict has now killed an estimated 60,000 people and a military stalemate has formed while hundreds of thousands of refugees flood into Syria's neighbors.

The Syrian Interior Ministry called on Thursday for Syrian refugees to come home and said they would be guaranteed safety.

A statement on the state news agency SANA said the government was "offering guarantees to all political opposition sides to enter the country ... (and) ... take part in the national dialogue without any query."

Few who left have returned, especially opposition supporters, and Assad said in a speech this month that he would not talk with opposition members he said had betrayed Syria or "gangs recruited abroad that follow the orders of foreigners".

The war has reached every province in the country and fighting has encroached on the heart of the capital Damascus, with residents reporting the daily thud of artillery being fired on rebel-held districts in the outskirts.

U.S. ambassador to Syria Robert Ford told CNN on Thursday that Assad's mother Anisa Makhlouf and his sister Bushra had both moved to the United Arab Emirates. It is not clear why they left.

SHABBIHA BROUGHT IN
Activist Nader al-Husseini, speaking by phone from the western sector of Homs, said at least 10,000 pro-Assad shabbiha militiamen had been brought from the coastal city of Tartous to back up the regular army.

"They go in infantry formations behind the soldiers and their specialty is looting and killing civilians," he said, adding that among dozens killed by the shabbiha were a family of five in the village of Naqira.

Husseini said 100 wounded civilians were trapped in Homs' western neighborhood of Kafar Aya and that the Free Syrian Army rebels had tried to negotiate a deal to evacuate them but failed.

Opposition sources blame shabbiha for the death of more than 100 Sunni men, women and children when they overran a nearby area 10 days ago.

Mostly Sunni Homs, a commercial and agricultural hub 140 km (90 miles) north of Damascus, has been at the heart of the uprising and armed insurgency against Assad and his establishment, composed mostly of Alawites, who follow an offshoot of Shi'ite Islam and comprise about 10 percent of the population. There is a large Alawite minority in Homs.

Syrian authorities have not commented directly on the latest offensive, but official media have in the past referred to the need to ‘cleanse' the city of what they described as terrorists who were terrorizing peaceful neighborhoods.

Tareq, another activist, said the fall of Kafar Aya and the adjacent neighborhoods of Jobar and al-Sultaniya would make the position of Sunnis in the city untenable.

"These districts are the front line with Alawite areas from where rebels have been sometimes disrupting the road between Damascus and Tartous. If they fall the Assad army will have carved a big hole to proceed deep into Homs and secure the link to the capital."