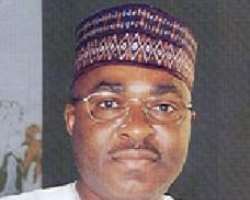 Under the Millennium Development Goals [MDGs] program, the Governor of Bauchi State set out to provide water boreholes to 300 villages in Bauchi State. To that effect, he set up a Project Advisory Committee to coordinate MDGs related activities. The Commissioner for Budget and Economic Planning, Shehu Barau Ningi was made the Chairman.

On February 2008, the Governor's committee shifted into project development. They invited bidders to bid on the project – of which 136 bidders responded. When the bid package was opened on February 25th 2008 at the Zaranda Hotel, 40 bidders were selected ~ 13 to install 100 solar powered systems and 27 to install 200 manually powered systems – at a total sum of N1,053,341,500 [each solar system cost N8.53million; each manual system cost N1million].

Following the bid exercise, the Chairman of the Project Advisory Committee, Shehu Ningi, forwarded a recommendation of the committee to the Governor in a letter dated March 17th 2008 referenced “recommendation for award of contracts on MGDs water suppy projects in Bauchi State.” The sought for approval for award of contracts to the 40 selected bidders [see letter page 1; page 2; page 3; page 4; page 5]

Responding, the following day, the Governor wrote in hand written form that “I am not in support of distributing these all important project. Select the Best contractor among them who we can hold responsible in the event of collapse of any of the boreholes. We intended over 4000 boreholes out of which not more than 50 are functioning. Since the pricing is the same, you award the contract to the China Zhonghao who we know the reputation and capacities. We are also assured that in the event of collapse of any, they will rehabilitate without problems.” In effect, the Governor directed the Chairman of the Committee to award the entire contract a preferred contractor – whom the Governor had previously awarded a “no bid” contract of N5.5billion for the construction of Ningi-bura road.

The Governor's instructions to subvert due process immediately resulted in a surprise twist. This is as the Govenor was alerted that a petition at the ICPC titled “the looting of Bauchi State by Mallam Isa Yuguda and his cronies” dated May 26th 2008 authored by a Bala Usman Zaranda – was awaiting treatment. Almost immediately, the Governor pointed accusatory finger at the Chairman of the Project Advisory Committee as masterminding the petition.

As a result, on June 19th 2008, the Governor, in a secret and confidential letter referenced GO/GS/S/EST/67/T.1 queried Mallam Shehu Barau Ningi stating that “I am to request you to explain within 24hours from the date of this letter, what you know about the content of the petition and how the petitioner has access to classified information from a file under your custody.” The letter was signed by the Secretary to the State Government, Ahmed Ibrahim Dandija [see letter, page 1; page 2].

In another exhibition of the unholy alliance with China Zhonghao, the Governor used his Secretary to the State Government and his Senior Special Assistant on Project and Monitoring to illegally award Zhonghao a contract valued at N1,353,020,404.05 [N1.35billion]. The contract was awarded in July 2007.

In early July of 2007, the Governor assigned water supply development project to the Project Monitoring Unit in tandem with the Ministry of Water Resources – and the office of the Senior Special Assistant on Projects and Monitoring was made the coordinator. And on July 18th 2007, the Senior Special Assistant on Projects and Monitoring, Arc Kabir B. Ma'aji wrote to the Governor through the SSG seeking approval to award a water scheme contract to China Zhonghao at the price of N1,353,020,404.05. The letter referenced “provision of potable drinking water in schools, hospitals and communities” and stated that “after careful evaluation, M/S China Zhonghao [Nig.] Ltd is recommended having the lowest bid of N1,603,619,737.31 for drilling of boreholes. Although the contract bid figure is higher than our base estimates, he has agreed to carry out the works at our base estimates in the total sum of N1,353,020,704.05 including Project Administration, Prelims and Contingency.” The recommendation did not mention the amount the other two bidders provided [see letter, page 1; page 2; page 3].

Responding, the Governor gave his approval in a hand written memo to the SSG. He followed the approval with the instruction that an initial 50% be paid in advance – and that it be withdrawn from the excess crude account. In his words, “the 50% advance payment approved and be released from the excess crude account since the money is dedicated for such projects.” With this, N676,510,352.02 [N676.5million] was payout to China Zhonghao the next day.

Ukpakareports.com is not certain how the 'golden child' Governor of Bauchi managed to evade the attention of Economic and Financial Crime Commission [EFCC] and other authorities. But informed insiders within the Yar'Adua indicate that Gov Isa Yuguda remains an untouchable in the PDP led government under the Yar'Adua government. Perhaps, as the collective will of the Nigerian citizenry continues to percolate against the maladies of daylight corruption via the untouchables of Yar'Adua administration, it is hoped a natural solution will sort itself.