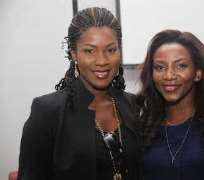 There is much tension in Nollywood at the moment as practitioners await the announcement of nominees for the first Africa Magic Viewers Choice Awards (AMVCA) to be announced on Monday, January 28, 2013.

No one is sure who will make the list to begin the search for the most popular in the 26 categories of the awards to be judged by the viewers.

The main awards ceremony will hold in Lagos in March 2013. The event is organised by Africa Magic and MultiChoice Africa.

AMVCA was created to celebrate both on-the-screen and behind-the-scene African talents. 28 awards are up for grabs.

I'll give $2,000 to anyone or group of persons who are in the possession of my missing digital camera---Kas

Segun Arinze Has the Sexiest Eyeballs in Nollywood

Why Oluwagbemisola Shotade, Miss Tourism United Nations won't have s*x for a year

My first introduction to sex was r*pe” – Foluke Daramola