EXCLUSIVE: Taiwo Aromokun's Marriage In Fresh Trouble **Hubby Has 2 Kids In Holland **Has No Dutch Papers After Over 15 Years In Holland 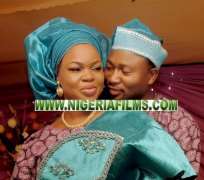 Some weeks ago, news filtered everywhere that Yoruba actress, Taiwo Aromokun was secretly married in London to a London-based lover, Olayemi Abimbola popularly called Ogunre by many in Holland.

Soon after the wedding to Ogunre, the actress took a swipe on Nigerian men claiming all they (Nigerian men living in Nigeria) know how to do is to use and dump 'celebrities' like her. She then reportedly stated that it now became necessary for 'them (celebs)' to go for guys abroad.

According to our source in London, Ogunre, Aromukun's hubby, has been in Holland for over 15 years. We learnt that he has no legitimate job he does. What he does for a living is known to us now, but we would reveal that soonest.

Ogunre, reliable sources maintained, has two kids he had from a Surinam woman in Holland. Suriname is a Dutch colonised region. What we can authoritatively inform you is that the Surinam woman, as at the moment, doesn't know that Ogunre is now married to Taiwo Aromokun.

His first child, a son, is well over six years old now. Few years ago, when he clocked one, Ogunre staged an elaborate birthday bash for him in Holland. It was Pasuma Alabi, the Fuji musician, that thrilled the guests that day.

As a result, he can enjoy full benefits of a citizen or a holder of a Dutch passport, but he can only live in Holland without hiding from the authorities like he used to.

On his reported wedding in London, Nollywoodgists.com can authoritatively tell you that Ogunre can never legitimately enter London or the UK because of his papers (his pardon by Dutch authorities) doesn't permit him to go to other European countries legitimately.

Sources in London sworn to us that the wedding didn't take place in London as reported by the Nigerian media, unless he illegally sneaked in, which might put him in trouble.

"I can tell you that Ogunre can never do that wedding here in London. He wan thief am (pigin English)?" our source asked.

As it is now, our source informed us that Taiwo Aromokun cannot join her 'husband', Ogunre, in Holland just as Ogunre may not also relocate to Nigeria to live with Taiwo Aromokun because of two things 1. his babymama and kinds in Holland and 2. he may not be able to live like a guy that has spent over 15 years abroad because he would be expected to be live like a rich guy.

We promise to bring more shocking secrets, especially what he does for a living in our next report.