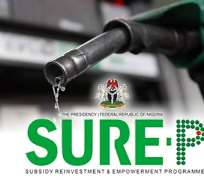 The Chairman of SURE-P, Dr. Christopher Kolade, was also absent.

The House Joint Committee on Petroleum Resources (Downstream), Finance, and States and Local Government who were mandated to probe the implementation level of the SURE-P programme expressed disappointment with the attitude of the Ministers and warned that it would no longer tolerate contempt of parliament by any public servant.

Co-joint-committee Chairman, Hon. Dakuku Peterside (PDP-Rivers) who spoke on behalf of the committee condemned what he described as a "deliberate decision of the Ministers not to honour the invitation of the House."

"We are absolutely not happy with the development today. You may observe that all the Ministers who should be here are not here. All the Ministers we invited have intentionally refused to come.

The committee thereafter adjourned the session to February 12, 2013 with a firm warning to all invitees to attend.

THEWILL can however report that the Ministers of Finance and Pretroleum Resources as well as the CBN Governor accompanied President Goodluck Ebele Jonathan to Davos, Switzerland for the World Economic Forum.