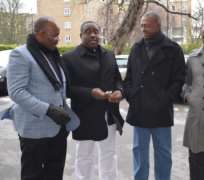 There have been rumours surrounding Chime’s wellbeing since he departed Nigeria in September last year in search of cure for an undisclosed ailment.

THEWILL has independently verified the authenticity of the photograph.

The Enugu Governor has been in and out of hospitals in India and the United Kingdom. A local newspaper reported today that he is an out-patient at the upscale Harley Street Clinic in Central London.