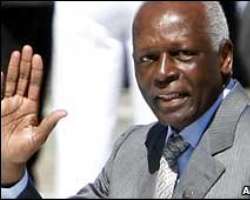 The head of state will now be nominated by the party with the majority in the parliament.

The main opposition, Unita, boycotted the vote, accusing the government of trying to destroy democracy.

President Jose Eduardo dos Santos has been in power for more than three decades and the next polls are not expected until 2012.

The oil-rich nation is recovering from a long civil war which ended in 2002.

The change was approved by 186 out of the 220 members of parliament, and drew loud applause and chants of "Angola, Angola!" from MPs in chamber, AFP news agency reports.

The BBC's Louise Redvers in Angola says the vote on the new constitution - which also declares Portuguese the national language and Luanda the capital - was not expected until March.

Angola is currently hosting the Africa Cup of Nations football tournament and some say the government deliberately rushed through the vote in a bid to avoid wider public debate, she reports.

The new constitution also abolishes the role of prime minister, allowing the president to chose his own deputy to take on that role.

The extension of the president's powers has come in for criticism.

"The ruling MPLA says the constitution will increase democracy, but by abolishing the presidential ballot and concentrating all the power on the president it will do exactly the opposite," political analyst Fernando Macedo told Reuters news agency.