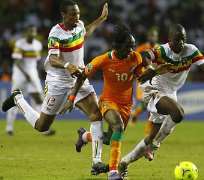 A goal from Gervinho two minutes from time saw Ivory Coast steal the first three points of their 2013 African Cup of Nations Group D match with a 2-1 win over Togo at the Royal Bafokeng stadium on Tuesday afternoon.

The first 45 was a half characterised by poor mistakes from both sides, more especially by the favourites, Ivory Coast, as some careless passing gifted Togo the majority of the possession in the opening stanza.

Nonetheless, despite their sloppy play, the Elephants still had the better of the opportunities in front of goal.

The first chance of the half, however, came as early as the third minute after a mistake at the back by Kolo Toure which let Emmanuel Adebayor through on goal and with just the keeper to beat. The Tottenham Hotspur striker, though, failed to take the opportunity as he tried to round the keeper, but Copa Barry managed to nick the ball off his toes.

Five minutes later and Adebayor was left to rue his missed chance as Yaya Toure gave Ivory Coast the lead.

Gervinho coasted his way past his marker on the right flank before cutting the ball back from the by-line for an unmarked Yaya Toure who fired goalwards from 16-yards out, his shot taking a deflection on its way into the back of the net, 1-0.

After going behind Togo pressed forward and saw more of the ball, but they were unable to break down a resilient Elephants defence and consequently tried their luck from long range, but with very little effect.

In the 44th minute Ivory Coast were unlucky not to double their lead as Gervinho created more danger down the right from a short corner as he worked his way into the box, before again cutting the ball back for Yaya Toure in a similar position to where he scored his first goal from. This time, however, his stinging shot rattled the right-hand post and bounced away from danger.

And then seconds before the halftime break, Ivory Coast were stunned as Togo managed to equalise.

Some sloppy defending at a corner saw a low cross make its way past the front post to an unmarked Jonathan Ayite who sided-footed the ball home from six-yards out to level matters at 1-1 going into the halftime break.

The start of the second 45 saw Ivory Coast holding onto the ball a bit better as they searched for openings in front of the Togo goal.

The Elephants did manage to slip Didier Ya Konan through on goal in the 56th minute, but he fired his shot straight at the keeper from close range who made the rather easy save. A shot either side of the keeper would have resulted in a goal.

Ivory Coast had another great chance to score in the 75th minute when some slick passing by the Elephants saw Gervinho in behind the Togolese defence who proceeded to cut the ball back for Yaya Toure, 14-yards out from goal, but he saw his shot superbly saved by Kossi Agassa diving to his right.

Finally, two minutes before time, Ivory Coast were able to make the pressure tell as Gervinho stole the win.

Yaya Toure delivered a right sided set-piece deep into the box and Gervinho was at the back post with a clinical finish with the outside of his boot from a tight angle to give the Elephants the win, 2-1.