The Composition and Uniqueness of Man as God’s Creation 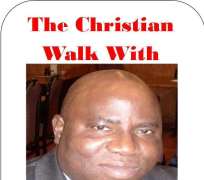 Next week, you will be amazed at some revelations of the Holy Spirit on the above questions and more. The answers will challenge your faith and give you more knowledge into the Word of Life. You will love this, because you may be reading for the first time some of the things you will read here next week and this will prompt you to go back to your pastor and Bible Study teachers to ask questions after aligning what you will read here with the Word of the Holy Bible.

REACTION TO ISSUE OF THE WEEK: I rarely react to the teachings and sermons of pastors and other fellow men and women, because I follow the Word of the Holy Bible that we are supposed to gather together in the vineyard of Our Lord and Savior. We have different gifts but the Holy Spirit determines the gift appropriate for each and every one in His house hold. But one is constrained to make corrections when a pastor, an evangelist, a teacher or a missionary makes a pronouncement that is at variance with the Word of God. It is very, very important that anyone, who opens his/her mouth to teach the Word of God, or picks a pen to write about the issues of eternal life must be very, very careful on what he/she says or writes, including this columnist. We will be judged more than others, because what we say or write will stand before us on the Day. If you are not called by the Lord God Almighty to be a teacher of His Word and you take the job of teaching the Holy Bible without directive and direction from the Author of the Book of Life, the Holy Bible, and begin to write rubbish or say/talk what you are not asked or told to say, you are courting overwhelming disaster for yourself and damnation on your life on the Day of Judgment. In addition, your talk/sermon or article may lead a lot of people astray and the Lord God will hold you responsible for the souls of such people. This is why I am pained in my spirit by what was credited to Mr. Kris Okotie, a popular pastor in Nigeria and Head Pastor, Household Church of God Oregun Lagos Nigeria. He was reported to have told his congregation that there was nothing wrong for a redeemed child of God, a born-again Christian to have a tattoo on his or her body. The issue of tattoo was first brought to my notice by my son here in the United States, who asked me whether a Christian should wear a tattoo. The Lord God Almighty condemned tattoo in all ramifications: “Do not cut your bodies for the dead or put tattoo marks on yourselves. I am the Lord, “(Leviticus, 19: 28). Tattoos had their origins in Mesopotamia and the old Canaan, as parts of ritual worship of necromancy among the pagan worshippers depicting visualizations of demons in charge of channeling dead people. It was part of demon worship, which in modern times has crept into today's fashion world, yet its demonic origin is unmistakable. As Apostle Paul admonished believers in Romans 12: 1: “Therefore, I urge you, brothers and sisters, in view of God's mercy, to offer your bodies as a living sacrifice, holy and pleasing to God—this is your true and proper worship” (NIV). Every citizen of a nation procures international passport as proof of citizenship of that particular nation so also demons would love to identify those, who worship them through bodily markings or tattoos. We are also warned in I Corinthian 6: 19: “What? Know ye not that your body is the temple of the Holy Ghost which is in you, which ye have of God, and ye are not your own?”(KJV) In addition to tattoos, this is why believers are not expected to smoke tobacco, use needles to ingest drugs of any type into their bodies, because, the demonstration of our victory over the flesh and reverence for Our Lord, Master and Savior Jesus Christ is not to destroy this living temple until the Day He comes back as He has promised to take us home. FROM MY MAIL BAG THIS WEEK:

Hello Dr. Fayemiwo, I hope you and your families are doing well. Congratulations for your new column. I am sure your writing will attract readers to the Nigerian World, knowing you as an intellectual. I will definitely check your column out soon. Our radio program has not returned yet because of time. As one of our panelists, you will be informed when we come back on the air. Best wishes and Happy New Year to you and your family. --- Dr. Emeka Emekauwa (PhD), General Manager, and host of “African Series, Saturday 3-6pm program, WSHA 88.9FM Radio, and Professor and Head, Department of Mass Communication, Shaw University Raleigh, North Carolina, USA.

Thanks Dr Emekauwa, I will look forward to joining you when the program is back on air (Dr Fayemiwo used to be an African policy analyst and an African historian/political expert on “African Series Saturday 3-6pm program, WSHA 88.9FM Radio, Shaw University Raleigh, North Carolina, USA

================.
Thank you for your article. You have always been a blessing. I also read your write ups in the Nigeria World and other publications/Internet sites. Please, continue to do what you know to do best with the Power of the Holy Spirit– inspire and bless others with God's Word. Blessings---Anonymous, Lagos, Nigeria, West Africa.

Thank you Mr. /Ms. Anonymous, but you should have disclosed your name.

=========================.
Re: Your article; “Reclaiming the Soul and Spirit of Modern America” of Sunday, December 16, 2012. Waooo! This is a fabulous write up. I guess we need you in Nigeria Sir in order to educate the younger generation about the essence of living. Nigeria is becoming far worse than America in violence among teens. I think the Republicans should be blame for all the menace of gun violence in America---Anonymous, December 19, 2012.

Well, Anonymous, I was born and raised in Nigeria, but had to leave with my entire family because of our futures and those yet unborn that are being mortgaged by Nigeria's serial decadent rulers. I think the whole world, more than Nigeria needs me and Glory to the Name of Our Lord and Savior Jesus Christ. I am sad to read about the menace of gun violence in Nigeria. I observed the same thing the last time I visited. Thank you for your letter Mr. /Ms. Anonymous, even though you didn't disclose your name.

================.
If we preach and know all what you have written here Sir, why is Nigeria still being messed up? We have too many preaching and less doing. I hope that as we preach all these great words from the Holy Bible, we will also use them to better our society. Thank you for sharing God's word in this site. I love the content in this site so far. God bless you---Nzeribe on the article: “What Exactly Does It Mean to Be a Born-Again Christian? December 16, 2012, Nigeria, West Africa.

Mr. or Ms. Nzeribe, your observations are apt. Yes, while some Nigerian Christian leaders are using Christianity to line up their pockets, because as the Holy Bible says, the god of such Christian leaders is their stomach, there are also some genuine Christian leaders, who are really worshipping the True God. It has always been like that from Church history. Ultimately, whether Nigeria survives as a nation or not depends on Nigerians for we need to pray, because prayers are good, but as Our Lord Jesus Christ admonished the Pharisees, we should also not neglect the issues of poverty, probity and prudence, servant hood, transparence, equity, justice and good governance. Those are our parts to play as human beings and not God. Unfortunately, I do not live in Nigeria, but I pray for Nigeria, the land of my birth as I pray also for other nations of the world, including my adopted nation, the United States of America. Do not lose sight of the fact that the way Christianity is practiced in Nigeria is different from here in the United States. There is too much hypocrisy in Nigerian Christendom. I will expatiate on this issue in my subsequent articles in this column. Once again, thanks for your observation.

===============.
Dear Sir, I have been following your interesting write ups. I thank God for your life and safety from Abacha's Gulag. My family and I always pray for you when we heard that you were kidnaped in Nigeria during the brutal military regime of late General Sani Abacha in Nigeria in 1997. It is well and we thank God for everything. Be blessed and have happy prosperous New year--- Ms. Esther Barinem Kiobel, Grand Prairie, Arlington, TX, USA.

Quite a long time, Mrs. Kiobel. Thank you very much; God Almighty brought me out safely from Abacha's Gulag and thank you for your prayer support in those years.

================.
Dear Dr Fayemiwo, Bros Long time! I usually enjoy your writings. You were my senior in the secondary school way back in Nigeria in the 1970s and I must confess; I am extremely proud of you---Bode Akadiri, University of Ibadan, Nigeria and now Social Worker, State of Maryland, Baltimore, Maryland, USA.

Bode, how are you and life in Baltimore, Maryland? Thank you very much for your kind words.

================.
Thank you sir, your article and many write-ups are very interesting. Thank you for sharing what the Holy Spirit has inspired you to share with the world. May God Almighty continue to support you. Stay blessed and much love--- Mr. Azeez Akeem Ayodeji, Owo Polytechnic, Owo, Ondo State, Nigeria, West Africa.

God Almighty will continue to guard and guide you, Akeem. Remain Blessed.

*Dr Fayemiwo is author, publisher and CEO, Alternative Lifestyle Communication, DBA and an adjunct lecturer in African History & Media Studies at the City Colleges of Chicago in Illinois, USA.

Read his weekly column "The Christian Walk" here every Monday.

Disclaimer: "The views/contents expressed in this article are the sole responsibility of The Christian Walk and do not necessarily reflect those of The Nigerian Voice. The Nigerian Voice will not be responsible or liable for any inaccurate or incorrect statements contained in this article."
Articles by The Christian Walk
14-10-2015  Request For A Ministerial Slot-the Federal Ministry Of Agriculture And Rural Development-for A Diasp2-10-2015  Without The Holy Spirit, You Are Not Saved And Not A Christian26-9-2015  The Jesus Christ Solution Center, Texas And The Glory Of The Lord God Almighty21-7-2015  Memo As President Muhammadu Buhari Comes To Washington13-7-2015  What Does The Lord God Almighty Want Me To Do?More...