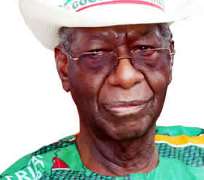 ABUJA, January 20, (THEWILL) - One of the leading aspirants to the position of Board of Trustees (BoT) chairman of the ruling People's Democratic Party (PDP), Chief Tony Anenih, may be in for trouble as the House of Representatives has summoned him over an alleged N20 billion fraud.

The House committee chairman, Hon. Solomon Adeola, who disclosed this said the lack of proper information on how the N20 billion contract was executed has seriously hampered the work of the committee. He said it has become imperative for the committee to invite the PDP chieftain to make some clarifications to enable them conclude their report on the Auditor General to the Federation's annual reports for 2006.

Confirming the summon, Adeola said "we will formally invite Anenih to come and explain to us how about N20billion remained largely unaccounted for during his tenure as Works Minister.

"We want him to come so that we can conclude our findings because he has a case to answer. If he does not come, it will make our findings inconclusive," adding "We are going to do that this week unfailingly. "

He disclosed that nine Permanent Secretaries managing Basin Authorities in their various states would also appear before the committee to explain how N993million disappeared from their coffers.

"These men will give account of all the monies because some of them have been retired from service and they are still working.

""Some have been acting for over a period of six months, we know the number of months that they can act."

It will be recalled that the former Minister of Works, Anenih,was mentioned last year to have been involved in a N2.3 billion scam purportedly disbursed for an abandoned road project in Nassarawa State in 2006.The contract was said to have been awarded in 2001.

The committee also threatened to summon the site engineers, Federal Controller of Works and Permanent Secretary of the ministry when the contract was awarded.

The committee chairman had also threatened to use the services of Interpol to extradite the contractor, Torino Internazionale Nigeria Limited, that left the country after collecting N1.8 billion without executing the road project.

According to him, Chief Anenih had been invited in respect of a memo he presented to the then Federal Executive Council, FEC, under former President lObasanjo, which made the body to award the contract, despite earlier strong advice that the firm had no technical capacity to handle the road project.

The committee had expressed reservation as to why such huge amount of money would go down the drain under the watchful eyes of those at the helms of affairs.

The Auditor-General of the Federation, AGF, had in his 2006 audit report, alleged that the failed road contract was awarded at the cost of N2.3 billion, of which N552 million was paid, before the contract was terminated.The contractor later went to court and obtained court judgment of N1.3 billion against the Federal Government for terminating the contract.