Townhall Meeting With Jonathan At Potiskum 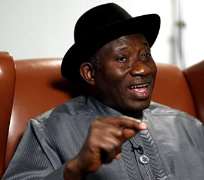 It was a townhall meeting with a difference. We all had arrived the dusty town of Potiskum in Yobe. It wasn't the regular town hall meeting; the choice of Yobe state was deliberate. It was a do or die affair, and the stakes were high.

Townhall lunch meeting with Mr. President of the Federal Republic of Nigeria Jonathan Goodluck. For a president who eats very little in a city not far from conflict. The setting was ripe.

Thought initially that very few of us would make it, but the hall was filled, we showed we all are BH in nature, one way or the other, as long as the subject is Nigeria, we all are on the tip of a double-edged knife.

MC Wahala, top DG in one of those parastatals monies disappear compeered and made the welcome speech.

Excerpts: "Mr. President, I greet you with the love of the Almighty and a fellow Nigerian. I greet you with empathy and sympathy, I salute you sir, because it is not easy. Don't mind what we say most times, the fact remains that very few of us would have done any better as president. We thank you sir for making it to Yobe, the new home of peace".

"This meeting is to hear Nigerians out; it would be an assumption to think you know sir, because sometimes regarding Nigeria which you 'rule'. Many of us often think we know sometimes, but we really do not know... With these words of admonition, I open the floor for questions, comments and suggestions; let's keep our comments mild, our hosts do not want peace compromised..."

Madam A opened the floor, she said "It just hurts me that you are squandering the first opportunity your region has at the seat in Aso Rock".

Mr. B asked, "Well, tell us Mr. President, honestly can you handle Nigeria?"

Sergeant C inquired, "Good afternoon sir. How many pairs of shoes do you now have?"

And Iya D, fumed, "Please resign sir if you can't muster the guts to jail the cabals.

Baba E expresses his heartfelt love asking you in local parlance "Mr. President, in your heart of heart, is there any benefit that has been derived from the fuel price increment? If no, why not revert it to status quo, your so called palliative was dead on arrival".

Father F said "You have failed us sincerely".
And Sister G just asked "Mr. President how would corruption be eradicated. Sir, you would agree that if you love someone sometimes this kind of assurances are needed.

Mallam H, told the President that "there's no shame admitting that you are overwhelmed by the reality of governance in a complex state like Nigeria".

Alagba I just requested for N1billion. And Hajiya J asked "Have you once had no Spoon to eat?" Otunba K asked,"Mr. President can I be your PA for life?"

Sheikh L said "belated congratulations on your electoral victory. Enjoy it. Don't mind the noisemakers, after all the next man won't be any better?"

Dr. N asked, "Sir, are you reaIIy a PhD holder or is it just a gimmick - Like the no shoe tale?"

Economist P advised "Your Excellency, cut down the recurrent cost of the budget to make more money available for capital projects".

Dame Q stated that "since the democratic dispensation began I haven't heard of so much money being signed out and nothing to show for is it like an investment where Nigerians get to lose or it's just 'corruption'?"

Student R wanted to know “what are the actionable steps taken to get millions of jobless Nigerians to work".

Sometimes these kind of parley produce heated moments, times of humor and plenty reflection. Tailor S asked, "what if you wake tomorrow and discover you are still shoe-less, yawning and getting ready to go fishing; how would you feel?.

Nurse T, asked, "Is there going to be a brighter future for Nigerian youths?"

Bus Conductor U just asked, "Sir give me for a job".

An Electrician V admonished, "My president, bite the bullet and put Nigeria on the straight and narrow. Pay the supreme sacrifice, if necessary, it's called leadership".

An eleven year W asked "Mr. President where are you taking Nigeria to?"

A mechanic called X, wanted to know "what the future holds for an average Nigerian/common man in this country?"

Pharmacist Y was of the opinion that "Mr. President come out clean and honest with Nigerians?"

A certain Z ended it all. He asked "Mr. President, why did you run for the office when you know that you are not capable of taking up the responsibilities that come with it?"

He wanted to know who really who was our president?

And asked "if he really read the newspapers?"

He encouraged Mr. President, "now that you have gotten your pair of shoes..., kick some butts".

Others sympathized with him, one of the most hated Presidents, "do you know that Nigerians don't like you", they said.

They asked "why he was surrounded with mad and clueless people?"

A man asked him "when shall we have our own shoe to wear...as he has gotten his?"

The President was taking points profusely and his expressions changed at intervals. You could notice that his aides twisted and turned their faces. There were questions on power, train, Boko Haram, Kidnap, his wife's health, PDP, opposition and a long list of issues.

Mr. President stood to answer, adjusted and gboom-gbam-boom-ka boom it was an explosion. We took to our heels in all directions. I woke up from my slumber, it was a dream. The questions were revealing, but really it was a case of a nation just moving in circles...do we want to move forward, only time will tell.