SURE-P Begins Distribution Of Forms For 15,000 Jobs In Ekiti 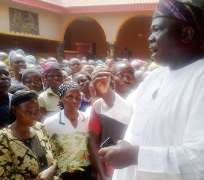 Subsidy Reinvestment Programme (SURE-P) has commenced the distribution of forms to interested applicants in the Community Services, Youths and Women Employment Scheme under which 15,000 youths are to be employed this year with 3,000 beneficiaries to be recruited in the first instance, while another 2,000 will be recruited in February.

Thousands of applicants besieged palaces of traditional rulers in the headquarter towns of the 16 local councils in the State on Friday to obtain the form and register for the scheme.

Addressing the youths at the palace of the Oore of Otun-Ekiti, headquater of Moba Local Government, Oba  Adedapo Popoola, Chairman of the State Implimentation Committee (SIC), Rt. Hon. Femi Akinyemi disclosed that by the end of February, the first 3,000 beneficiaries of the scheme would receive their first salary.

He said the scheme, when fully implemented would reduce poverty and crime in Ekiti State.

On why Oba palaces were used for the recruitment exercise, Akinyemi said; “We choose to use the palaces of our traditional rulers so as to show to the whole world that the programme is not designed for members of any political party.”

Akinyemi, who monitored the forms distribution with the three senatorial coordinators of the programme, Mrs. Tosin Aluko (Central), Hon. Kayode Ogunsakin (South) and Hon. Dare Olaosebikan (North) and the State Director, National Directorate of Employment (NDE), Dr Jumoke Oni, noted that the programme was not designed for any political party.

Akinyemi said; “From what is happening today, it can be seen that this programme is for all Nigerians, irrespective of political affiliation.

“The president, Dr Goodluck Jonathan  promised then that funds generated from the subsidy removal will be spent on developmental and empowerment programmes.

“We thank God today that what the President promised Nigerians about a year ago is coming into fruition.

“What we are doing today is the registration of would be beneficiaries and as soon as that is concluded, the first 3,000 beneficiaries will be selected and their names made public.

“We are going to employ 15,000 this year and I can assure that even crime rate in Ekiti will be reduced and problems of unemployment solved considerably by the time this programme is fully implemented.”