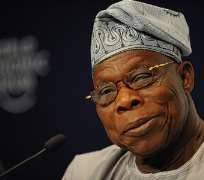 President Goodluck Jonathan has described former president Olusegun Obasanjo as a much admired and highly respected elder statesman whose life is closely tied to the history and evolution of Nigeria.

'The contribution of Baba Has secured for him a special place in the annals of our history. He guided our country through some of the most challenging periods of her history. Indeed there is much to him and his legacy as former president, former chairman of the Board of Trustees of our great party and foremost farmer.' Said Mr. President

President Goodluck Jonathan has however assured Nigerians that his administration is on course in fulfilling its promises and meeting its basic obligations to the people and called for continued cooperation and understanding to enable it achieve its good intentions and actionS.

The president used the occasion to inform Nigerians the giant strides his administration has made in revamping the critical sectors of the economy.

He stated that power generation has more than doubled since his assumption of office from 2000mw in 2010 to over 5000mw now, which had resulted in general improvement in power supply across the country. In addition, the president stated that the ten new thermal power plants would on completion, add about 5,000mw to the National Grid and that the completion of construction work of about about 4,000km of transmission lines and hundred injection substations across the country would boost power distribution; and that the government would continue to improve its generating capacity on a continuous basis in order to meet the country's Vision 20:2020. This it sought through diversifying its power generation sources. Already contracts have been awarded for the Zungeru Hydro-Power plant which on completion would add about 700mw to the national grid.

Also, contract documentation for the Mambila Hdyro-power plant, which would add about 3,050 mw has been concluded.

On Education, the president stated that his administration would ensure that every child was given his/her right to good and quality education.
The establishment of Almajirai boarding schools in the North and South-West and the Out-of-School Children programme in the south east and south-south parts of the country were meant to give less-privileged children the chance to be educated.

On agriculture, the president stated that his administration was fully on course in revolutionizing the sector and transforming it to a business not as a programme. Already, the federal government was providing several irrigation schemes and making access to financing easy to farmers. 'We are recapitalizing the Bank of Agriculture with an initial sum of N15billion in the 2013 farming season in order to provide funding at one digit interest rate to our farmers. Our plan is to increase the yield per hectare from about one tone per hectare to an average of 5 to 10 tonnes hectare' said the president.

On his part, former president Olusegun Obasanjo commended the administration of Goodluck Jonathan for doing what was right for the people by addressing the critical sectors of the economy.

Various dignitaries graced the occasions amongst which were John Kuffour the former president of Ghana and the PDP National Chairman Bamanga Tukur.