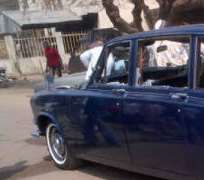 The attack occurred on Saturday afternoon along the popular Zoo Road in the metropolis, according to reports. Eyewitnesses reported an explosion and heavy gunfire.

Several other persons were also wounded during the attack.

The Emir however survived the attack with wounds and has been transported to his palace.

The respected royal father was attacked as he made his was back to the palace after attending the Qur’anic recitation competition at Massalacin Murtala.

A parked SUV reportedly exploded in the area followed by rapid gunfire from the gunmen, who were repelled by the fire of policemen attached to the Emir.

The Joint Task Force later responded to the attack and moved the Emir back to his palace.