Asiwaju Bola Tinubu Calls On Yar’Adua To Hand Over 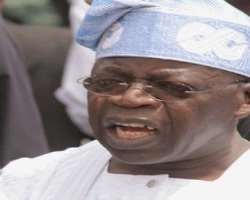 San Francisco Jan 18, (THEWILL) – A former governor of Lagos State and a leader of opposition political party, the Action Congress who has come under criticisms lately for his political flirtation with President Umaru Yar'Adua has added his voice to calls for the President to transfer power to the Vice president in the interest of the nation.

In a statement issued on Tuesday titled: "Yar'Adua, save the nation from imminent crisis, hand over to VP Jonathan," he said:

"Nigerians would recall that when I was asked of my opinion on whether President Umaru Yar'adua should resign and hand over to Vice President Goodluck Jonathan, a week after he left for medicare in Saudi Arabia on 23 November 2009, I said it was too premature to take such an action. This is because there was need to give the president all benefits of doubt regarding his health, and to give him some time, as the political situation might not be as serious as was being portrayed then.

"Now, it is exactly 57 days today (23 November 2009 to 19 January 2010) since the president left the country to seek good medicare, leaving behind a major political vacuum, while deliberately ignoring the constitutional provision that asked him to transmit his power to his vice president (Section 145, Constitution of the Federal Republic of Nigeria, 1999), whenever he is unable to perform his duty.

"The implication of the president's indecision and long absence is that the country is now drifting and groping in the dark, like a ship without a captain, in a stormy ocean. Thus, what was thought to be a storm in a tea cup, in terms of political crisis, has suddenly snowballed into a constitutional crisis; and from a constitutional crisis, into a leaderless political order.

"Now, our dear country is living on the edge and hanging dangerously with the Federal Executive Council (FEC) adrift, while the National Assembly has lost touch with reality; and the word, "national exigency" has since lost meaning to the remnants of the ruling party. The president's indecision and long absence is beginning to take a hard toll on the nation and the people, both at domestic and international levels. Commercially, our letters of credit are no longer being respected in some parts of the world.

“This has further put a question mark on our ability to engage in commerce. Long queues have returned to the petrol stations, while nobody is unable to take a firm decision to stop the drift into economic immobility. What is regarded as FEC decision today is leading dangerously to mismanagement of resources and creating easy avenues for fraud. It is pertinent to ask: is it legal for the Central Bank of Nigeria (CBN) to give cash backing for all contracts awarded by FEC, that may be deemed to be illegal in view of the non-delegation of power to the vice president? In view of this power uncertainty, the FEC being presided over by the vice-president, may even be violating financial regulations.

"What is worse is the recent classification of the nation as one of the major terrorist and pariah states, among such countries as Afghanistan, Pakistan, Iraq, Iran and Cuba. This followed the recent attempt by a Nigerian Umar Muttallab to bomb an American passenger plane.

"This happened because there was no official to assume the constitutional authority to engage the United States Government to explain that what happened was an isolated case of a misguided citizen in the same way as that of the British shoe bomber, hence had nothing to do with our national dynamics. In this instance, had the president of the United States or the Secretary of State wanted to talk to our president, there was none available. Neither was there delegated authority to engage the US government.

"Today, all Nigerians travelling abroad are being subjected to various acts of humiliation at major airports around the world, without a president making a case for us. This is not to say how much of our voices we have lost on major issues happening around the world, such as the present disaster in Haiti. Thanks to Prof. Soyinka for lending his credible voice and reputation to the Haiti tragedy and calling for compassion for the victims.

"The time has now come to put a stop to our slide into the abyss. The president must be told to face the truth and do what is proper of him constitutionally. Having listened to his last week BBC interview, it is obvious that our president is seriously ill. He was at pains to speak, as his voice portrayed someone who was seriously ill. As he himself said, he would not be able to come back to assume his duty until "tremendous progress" was made on his health. Now that he has spoken, confessed and admitted that he would not be able to come until "tremendous progress" was made on his health, every patriotic Nigerian must call on the president immediately to be patriotic enough to transmit in writing his authority to the vice president - after all, he purported signed the 2009 Supplementary Budget. Therefore, the President must be told, without further delay, to transmit his authority to Vice President Goodluck Jonathan to take charge of the country, in accordance with Section 145 of the Constitution.

"This is the time for the President to exhibit his avowed commitment to the rule of law by following the dictates of the Constitution. I recognise his love for his country, but this is the time to show that love for his country by putting the nation's interest above self, and not be misled by those selfish advisers. He has already made history by being elected as president of Nigeria.

"So, he must not destroy that democratic institution from which he has benefitted. The risk of his inaction, it must be noted, is worse than acceding to the nation's request.

"While wishing the President a speedy recovery, our country's constitutional democracy must be protected for posterity," he added.