Obama Inspires Brother To Run For Office In Kenya Elections 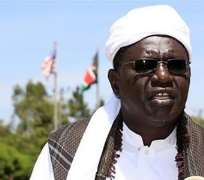 U.S. President Barack Obama's message of hope and change has inspired his half-brother Malik to launch a political career of his own, with his eye on elections in Kenya in March.

"If my brother is doing great things for people in the United States, why can't I do great things for Kenyans here?" Malik Obama told Reuters in the village of Kogelo, President Obama's ancestral homeland.

Malik, 54, is running for governorship of the rural Siaya county as an independent candidate.

His sibling's message resonates with a Kenyan electorate angry over a political class widely regarded as greedy and corrupt.

However, the odds are stacked against lone candidates in a country where ideology is trumped by tribe or clan ties. This is the first time independents have been permitted to run in an election after a constitutional change in 2010.

For Obama, the inspiration comes from elsewhere.
"He is an inspiration to me and I feel that he is an embodiment of my father's dream," he said of the U.S. leader.

"All he told me is ‘brother, it is not an easy thing to get into public office. Just have a thick skin because people will be targeting you. The media will be saying this and that. There will be people who love you and people who won't love you'."

He said his younger brother has flourished by following the footsteps of their father, Barack Obama Snr - the first African to attend the University of Hawaii before returning home to work in the senior echelons of the Kenyan civil service.

"The old and tested way has not really worked for us. Right now we need a bold, radical and fresh approach," he said.

Running late for the interview, Obama apologized, explaining he had to stop his car several times to talk to locals, who would routinely flag him down for greetings.

He says his race in the election is motivated by a desire to foster economic development and to answer the call of duty.

Obama, who said he is a polygamist with 10 children, has a campaign team that includes some family members and volunteers. He is unsure if the big name recognition he brings to the race will put him at an advantage.

President Obama visited Kogelo before his first election victory in 2008 which led to wild jubilation, dancing and parties. His November re-election was greeted with similar enthusiasm.

BRUISING BATTLE
To capture the governorship, Obama will face a bruising battle from the likes of Oburu Odinga, brother to Prime Minister Raila Odinga, and a new and popular entrant to the political scene, William Oduol.

Oburu Odinga is a long-serving member of parliament in the area, while Oduol, 35, has won favor with the youth.

"As much as the brother has done well in the U.S., the truth of the matter is that he (Malik) is not very close to the people here on the ground," Amos Owino, a 29-year old clinician, said.

Malik Obama, a resident of the United States, has lived in Washington DC since 1985 where he worked with various firms before becoming an independent financial consultant.

In his office are framed photographs of himself with President Obama in the Oval office and another at the president's wedding, where he was the best man.

He lives partly in the United States where he takes up work contracts from time to time and Kenya.

"We are very proud of him (Malik), but Oduol has better policies especially on education improvement and roads construction," said Irene Sindih, a 24-year old businesswoman.

Obama said he is running as an independent to avoid being beholden to party grandees whom he blames for what he says is the failed leadership in the country of 40 million.

Obama said the U.S. president also urged him to be honest with the electorate and to be true to himself.

His campaign slogan is "Just as it is in United States, I want it here", he said in his office in a recreation centre he set up with the Barack H. Foundation, a charitable organization he founded to build houses for women and orphans.

With a population of 832,000 people, the main economic activities in Siaya county are subsistence farming and small trading. Many residents live in mud huts with thatched roofs.

Obama wants to help build new roads, water and electricity supply, hospitals and small-scale industries once he is elected governor. After conquering this, he has eyes for an even bigger prize, the Kenyan presidency at the next elections in 2017.

"There is rampant poverty here. Our leaders are filthy rich and everybody else is dirt poor," said Obama rising to his feet to get back on the campaign trail.