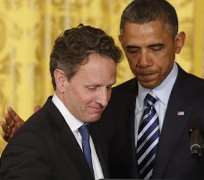 The U.S. economic recovery is entering the home strait, though unemployment is still very high and may only come down gradually, outgoing U.S. Treasury Secretary Timothy Geithner said.

"I think in the recovery, if you do basketball, we're in the early part of the fourth quarter," Geithner said in an interview with the Wall Street Journal.

The United States was further advanced than other countries in balancing debt against income and cutting leverage risk in the financial system, and "we are through the big adjustment in housing," he said.

Europe's recovery was at a much earlier stage, but the continent had "done this really important thing, which is to successfully, at least for now, take out of the markets the risk of some catastrophic collapse."

Last summer, the European Central Bank pledged to do everything necessary to protect the euro, later backing that pledge with a programme to buy bonds if a country needed it after applying for a bailout.

Geithner steps down from his post on Jan 25. President Barack Obama has nominated White House chief of staff Jack Lew to succeed him.