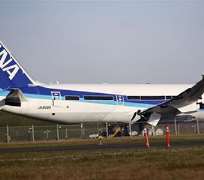 A team of experts from U.S. aviation authorities and Boeing Co arrived in Japan on Friday to inspect a 787 Dreamliner passenger jet that made an emergency landing on a domestic All Nippon Airways Co flight earlier this week.

The incident prompted regulators in the United States and around the world to ground the 50 Dreamliners already in service. Battery-related problems are being investigated after warning lights indicated a battery fault on the ANA flight on Wednesday.

The 787, a lightweight, mainly carbon-composite aircraft, has been plagued by mishaps, raising concerns over its use of lithium-ion batteries, which pack more energy and are faster to recharge but which are potentially more volatile.

The five representatives from the U.S. National Transportation Safety Board (NTSB), Federal Aviation Administration (FAA) and Boeing are helping Japanese authorities in the investigation of the aircraft, which remains parked at the side of Takamatsu airport in western Japan.

The Japan Transport Safety Board (JTSB) aims to end its initial checks by around midday on Saturday, a person familiar with the matter told Reuters.

"The Boeing 787 is an absolutely wonderful aircraft and we will spare no effort to help it get back in the air safely as soon as possible," said ANA spokesman Hideya Oishi.

GS Yuasa Corp, the Japanese company that makes batteries for the Dreamliner, said it also sent three engineers to Takamatsu to help the investigation.

A person at the company, who asked not to be named due to the sensitivity of the issue, said: "Our company's battery has been vilified for now, but it only functions as part of a whole system. So we're trying to find out exactly where there was a problem within the system."

Shares in the Kyoto-based battery maker rose 3 percent on Friday, having dropped around 18 percent since January 7 when a battery caught fire in the auxiliary power unit (APU) of a Japan Airlines (JAL) 787 parked at Boston Logan International Airport.

The U.S. investigation into that incident is focused for now on the Japanese-made batteries, with no indication the APU - built by United Technologies Corp's Pratt & Whitney - was involved, said a person familiar with the government probe, who was not authorized to speak publicly.

Laura Brown, a spokeswoman for the FAA in Washington, said she could not comment as the issue was part of the investigation.

Mark Rosenker, a retired Air Force two-star general who served as chairman of the NTSB under former President George W. Bush, said U.S. investigators, Boeing experts and the battery maker were conducting a meticulous investigation of what caused the lithium-ion batteries to fail. "This is a very complex issue that has tremendous ramifications."

He said Boeing conducted over 1.3 million hours of testing before deciding the lithium-ion batteries were safe to use on the 787, and the company had to satisfy additional rigorous tests to be granted "special condition" by the FAA for use of the batteries.

"I don't believe there was corner cutting in any way," he said. "I believe the FAA has done a good job in its certification process. And Boeing is a very formidable and extremely careful airplane manufacturer. You don't survive in this business by not making safe, efficient and reliable planes."

BIGGEST MARKET
Regulators in Japan said it was unclear when the Dreamliner could be back in the air. Japan is the biggest market so far for the 787, with ANA and JAL operating 24 of the 290-seat wide-bodied planes, which have a list price of $207 million.

Separately, the country's transport ministry said a fuel leak on a JAL-operated 787 last week was due to a malfunction in a drive mechanism that controls a valve. It said the British company that makes the valve was investigating. The ministry declined to name the firm.

Keeping the 787s on the ground could cost ANA alone more than $1.1 million a day, Mizuho Securities calculated, noting the Dreamliner was key to the airline's growth strategy.

Australia's Qantas Airways said it cancelled an order for one of 15 Dreamliners earmarked for its budget arm Jetstar. The carrier said the decision to cancel the order was taken late last year, before the plane's recent problems. Qantas has options to order 50 of the new generation aircraft.

BAD BATCH?
The JTSB has said the battery on the ANA flight that made the emergency landing was blackened and carbonized, had a bulge in the middle and weighed 5 kg less than normal.

The use of new battery technology is among the cost-saving features of the 787, which Boeing says burns 20 percent less fuel than rival jetliners using older technology.

Hans Weber, president and owner of TECOP International Ltd, a San Diego-based aviation consulting firm and former adviser to the FAA, said it was possible the incidents could be the result of a bad batch of batteries - as was the case with General Motors' Volt electric car, where fires were blamed on a defective batch of batteries supplied by A123 Systems, which has since gone into bankruptcy.

"These batteries require great care in manufacturing and the process needs to be highly automated so you can afford them. A123 had to pull back lots of batteries and that put them under," Weber noted.

The 787 represents a leap in aircraft design, but the project has been plagued by cost overruns and years of delays. Orders for the Dreamliner last year helped Boeing overtake rival Airbus as the world's largest manufacturer of passenger jets.

"This could turn out to be a minor technical problem, but the FAA has turned it into a significant marketing challenge for Boeing," said Loren Thompson, defense consultant and chief operating officer of the Lexington Institute, a Virginia-based think tank.